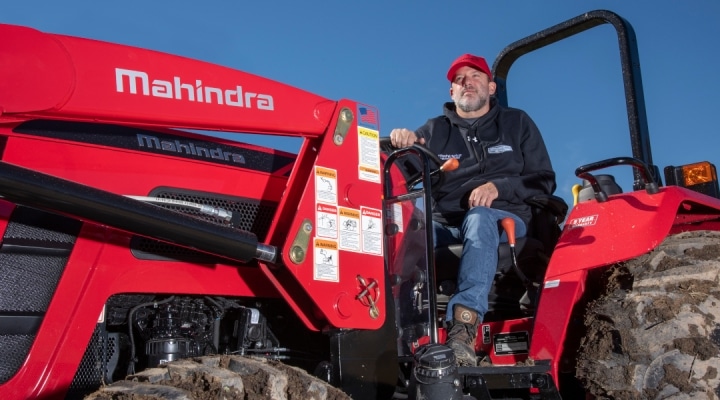 SPEEDWAY, Ind. — Mahindra Ag North America has joined Stewart-Haas Racing (SHR) as an anchor sponsor for its No. 14 NASCAR Cup Series team and driver Chase Briscoe beginning with the 2022 season.

The multiyear partnership with the championship-winning NASCAR team co-owned by NASCAR Hall of Famer Tony Stewart and industrialist Gene Haas will feature Mahindra Tractors, a brand of Mahindra Ag North America, on Briscoe’s No. 14 Ford Mustang for the majority of the NASCAR Cup Series schedule. The red-and-black No. 14 Mahindra Tractors Ford Mustang will debut in the non-points Busch Light Clash at the Coliseum Feb. 5-6 in Los Angeles before returning to action for the traditional start of the season with the 64th running of the Daytona 500 Feb. 20 at Daytona (Fla.) International Speedway.

Houston-based Mahindra Ag North America is part of Mahindra Group’s Automotive and Farm Sector, the No. 1 selling farm tractor company in the world, based on volumes across all company brands. Mahindra offers a range of tractor models from 20-125 horsepower, implements and the ROXOR side-by-side. Mahindra farm equipment is engineered to be easy to operate by first-time tractor or side-by-side owners and heavy duty to tackle the tough jobs of rural living, farming and ranching. Steel-framed Mahindra Tractors and side-by-sides are ideal for customers who demand performance, reliability and comfort at a great value. Mahindra dealers are independent, family-owned businesses located throughout the U.S. and Canada.

“NASCAR, Stewart-Haas Racing and Mahindra’s shared values form a strong platform for us to connect with existing and potential customers. Our partnership with SHR provides an opportunity to tell our story to the wide audience of NASCAR fans who enjoy the outdoors and working their land,” said Viren Popli, President and CEO, Mahindra Ag North America and Mahindra Automotive North America.

“Chase Briscoe and Tony Stewart are relatable men of great character who have worked hard to get where they are today. Like our dealers, they have a tough work ethic and the drive to be successful. We are proud to have them representing the brand. In fact, Tony is already a Mahindra owner and has been putting his 5145 tractor to good use on his ranch in Indiana,” Popli added.

Briscoe just completed his first year in the NASCAR Cup Series and the 26-year-old from Mitchell, Indiana, handily won the rookie-of-the-year title driving the No. 14 HighPoint.com Ford Mustang for SHR.

“The NASCAR Cup Series is the toughest racing I’ve ever been a part of. It’s so competitive,” Briscoe said. “I learned so much this year and I really can’t wait to apply it all next season.

“I’m incredibly honored to represent Mahindra Tractors and all of its dealers. We both want to continue to grow and perform – me on the racetrack and Mahindra in the marketplace. It’s a true partnership that’s valuable to both of us.”

Prior to being promoted to the NASCAR Cup Series, Briscoe competed in the NASCAR Xfinity Series where he won a series-high nine races in 2020.

“Chase has earned his spot in the Cup Series,” said Stewart, a fellow Hoosier from Columbus, Indiana, who lives on a 414-acre spread. “He was relentless. Anytime he was challenged, he never backed down, and that’s the way you to have to be at this level.

“Chase is just a really hard worker. He’s earned everything that’s come his way and then made the most of each opportunity. That’s what has always impressed me about him, and I think that’s what impressed Mahindra Tractors. They’re a really good fit. This is a very rewarding partnership and I’m proud to be a Mahindra customer.”

Briscoe is a third-generation racer whose career began on dirt tracks in and around Indiana. Stewart raced with Briscoe’s dad, Kevin, in USAC sprint cars and in non-wing cars, and he watched Chase come up through the open-wheel ranks of sprint cars and midgets on his way to NASCAR, just as Stewart did in the mid-1990s on his way to INDYCAR and then NASCAR.

“When it comes to the 14 car, I obviously have a passion for having dirt drivers behind the wheel,” Stewart said. “It’s special, but also practical. With the lower horsepower package they have in the Cup Series, you have to run these cars a lot freer, and I think that suits a driver with a dirt background.”

Briscoe will return to his dirt-track roots Jan. 10-15 during the 36th annual Chili Bowl Nationals at the Tulsa (Okla.) Expo Raceway inside the SageNet Center. Mahindra Tractors will be the primary sponsor of Briscoe’s No. 5 midget.

“Dirt-track racing makes me a better Cup Series driver,” said Briscoe, who will make his eighth Chili Bowl appearance in 2022. “It forces you to adapt. You have to run different lines to get the most out of your car and you have to do it quickly.

“When I won my first Xfinity Series race on the Roval at Charlotte, I drove it like a dirt track. I made sure to not spin the rear tires to where I was good at the end of a run. Running the Chili Bowl is fun, but it also keeps you sharp. It’ll be a great way to kick off our first season with Mahindra Tractors.”

Briscoe’s first time behind the wheel of a racecar came in 2001. Driving a quarter midget, he won his first heat race and then won the feature event later that evening. Briscoe moved on to mini sprints and when he was 13, stepped into a 410 sprint car where, in his first race, finished 10th in a 40-car field. In a rookie season that saw 37 starts, Briscoe racked up eight top-five and 17 top-10 finishes, including a win in the last race of the season where he broke NASCAR Hall of Famer and four-time NASCAR Cup Series champion Jeff Gordon’s record as the youngest person to win a 410 sprint car race.

Briscoe continued to race 410 sprint cars in the Midwest and people began to take notice. Soon, the switch from sprint cars to stock cars was on. Cunningham Motorsports hired Briscoe in 2016 to pilot its No. 77 Ford for a full-time drive in ARCA. Briscoe responded by winning six races and the championship by a whopping 535 points.

Briscoe has thrived in his transition to NASCAR, which was boosted by that ARCA title. He advanced to the NASCAR Camping World Truck Series in 2017, earning four poles and winning the season-ending Ford EcoBoost 200 at Homestead-Miami Speedway. Ten top-five and 14 top-10s allowed Briscoe to make the playoffs, finish sixth in points and score the series’ rookie-of-the-year and most-popular-driver awards.

Briscoe parlayed a limited Xfinity Series schedule in 2018 where he drove for both SHR and Roush-Fenway Racing into a full-time drive in 2019 for SHR where he won the rookie-of-the-year title. His stout, nine-win season in 2020 earned Briscoe a well-deserved promotion to the NASCAR Cup Series in 2021.

Mahindra Ag North America (MAgNA) is part of Mahindra Group’s Automotive and Farm Sector, the No. 1 selling farm tractor company in the world, based on volumes and the only tractor manufacturer in the world to win the industry’s top two quality awards – the Deming Application Prize and the Japan Quality Medal, care of Union of Japanese Scientists and Engineers. Mahindra serves the agricultural and rural lifestyle customers in the United States and Canada by partnering with a network of independently owned dealerships. Houston, Texas, based, MAgNA is a wholly owned subsidiary of Mahindra & Mahindra Ltd. and began selling tractors in the USA in 1994. To learn more about Mahindra Ag North America, please visit us online at MahindraUSA.com and on social at Facebook, Twitter, Instagram and YouTube. 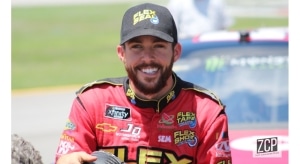 AUSTIN, Texas — Ross Chastain started the NASCAR season with one watermelon and it traveled with him from track to track. The fruit lasted five weeks before “The Watermelon Man” had to freshen his supply. The eighth generation watermelon farmer from Florida did not call home and ask his family to send a fresh melon […] 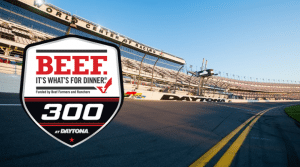