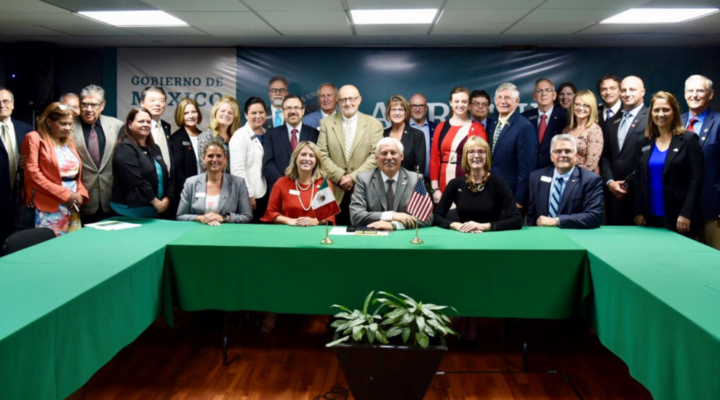 In Mexico, Lt. Governor Suzanne Crouch concluded her agriculture, economic development and tourism trip by meeting with Mexico’s Secretary of Agriculture and Rural Development Dr. Victor Villalobos, pictured here. Indiana was the first state in the nation to send a high-profile official delegation to Mexico, after the country’s ratification of the U.S.-Mexico-Canada Agreement in June. (Indiana State Department of Agriculture)

Indiana was the first state in the nation to send a high-profile official delegation to Mexico, after the country’s ratification of the U.S.-Mexico-Canada Agreement in June.

“Indiana and Mexico are bound together, and not just geographically by country, but economically,” Crouch said. “This meeting was a significant moment in our long and cherished history, and I look forward to building on our conversation to take agriculture and our two economies to the Next Level.”

During the meeting, Lt. Governor Crouch and Secretary Villalobos discussed opportunities to promote trade and enhance cooperation in the areas of food production, economic development, education and technology. They also talked about the importance of sustainability, as well as the need to encourage more innovation on the farm.

Indiana State Department of Agriculture Director Bruce Kettler, who was part of the conversation, found it to be very productive and hopes it will lead to new opportunities for Indiana’s farmers.

“When we first learned of Secretary Villalobos’ interest in meeting with us, we were thrilled because of the doors it could open for our farmers,” Kettler said. “That’s why we’re here, and now that we have a direct connection with the highest agricultural office in Mexico, we can work towards that goal more effectively.”

The tourism delegation met with representatives within the Foreign Tourism Ministries.  There, they discussed collaborating to get Indiana’s message to the seventeen million Mexican tourists that visit the U.S. each year.

At two Friends of Indiana receptions, it was all about forming relationships for the delegation. Government officials, stakeholders and media representatives all joined together for an exchange of ideas and learning.

“We set out with a priority of expanding the tourism footprint, bolstering the state’s culinary and agritourism profile,” said Misty Weisensteiner, Director of Office Tourism Development. “We feel like the meetings were productive and gave us a clear direction for future marketing in Mexico.”