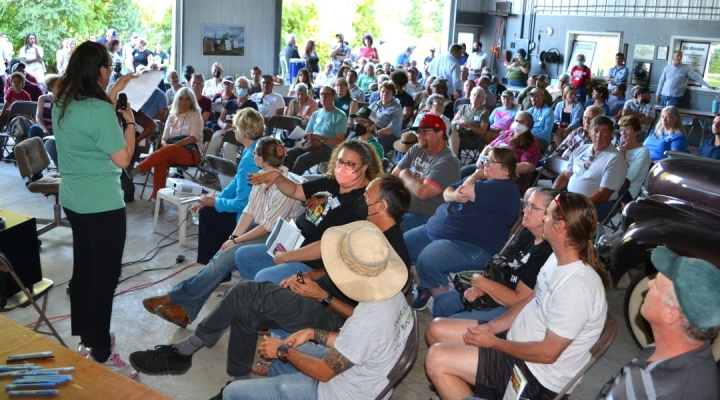 LSP’s 2023 Farm Bill Platform, which was launched during an event at Legvold Farms near Northfield, is based on a three-state survey of farmers and food system workers in Minnesota, Wisconsin and Iowa, as well as eight listening sessions LSP held in the region during the past several months. (Land Stewardship Project)

NORTHFIELD, Minn. — The new federal Farm Bill must benefit farmers, rural communities and the land, rather than corporate interests, said farmer-leaders of the Land Stewardship Project (LSP) Tuesday during the release of the organization’s priorities for the nation’s most comprehensive agricultural policy initiative.

LSP’s 2023 Farm Bill Platform, which was launched during an event at Legvold Farms near Northfield, is based on a three-state survey of farmers and food system workers in Minnesota, Wisconsin and Iowa, as well as eight listening sessions LSP held in the region during the past several months. LSP’s Farm Bill Organizing Committee, which consists of farmers from across the region, helped developed the document.

“I constantly am told there is no interest from young people in farming, and that is simply not true,” said Claudia Lenz, a beginning farmer from Star Prairie in western Wisconsin and a member of the Farm Bill Organizing Committee. “I know many young people who would love to either start their own farm or continue to operate their families’ farms. But because of the steep prices of input costs, lack of land access and lack of viable markets for their products, they do not see this as an option. In this Farm Bill, I would like to see more support for small farmers, and I think that one of the best ways to do that is to put a stop to corporate consolidation in agriculture and food systems, across the board.”

Every five years, Congress drafts a new federal Farm Bill, which determines how tens of billions of dollars are spent on what’s grown on the landscape and who grows it, as well as the environmental impact of production systems, the safety of our food and the economic health of rural communities. Congress has already begun debating the structure of the 2023 Farm Bill.

In the winter and spring of 2022, LSP, working with the National Young Farmers Coalition, Midwest Farmers of Color Collective, and others, undertook a farm bill survey which covered several topics, including: consolidation in agriculture, conservation and the effects of climate change, crop insurance reform, access to markets and regional food systems, and the barriers beginning and BIPOC (Black, Indigenous, people of color) farmers face.

The survey (landstewardshipproject.org/farmbill2023), which had over 700 respondents — 52% of whom were from Minnesota — revealed that current agricultural policy imposes numerous barriers when it comes to many farmers who are instrumental in building strong, resilient and equitable food systems, according to Sarah Goldman, an LSP organizer, who, along with organizer Maura Curry, coordinated the study and analyzed the results. For example, federal policy has supported unprecedented consolidation in agricultural markets, with, for example, four packers controlling 85% of the beef market. Meanwhile, 50% of survey respondents had trouble maintaining access to viable markets or finding affordable farmland.

LSP farmer-member Dana Seifert said she knows these issues all too well.

“Rampant consolidation and vertical integration have let agribusinesses reap record profits to fork over to shareholders, while raising input costs for farmers and pushing a version of agriculture that is a major contributor to climate change,” said Seifert, who farms near Jordan in east-central Minnesota and is a member of LSP’s Farm Bill Organizing Committee. “Promoting policies that incentivize this type of agriculture limits the capability of well-run farms and ranches to keep local economies thriving and people healthy.”

Survey respondents also called for federal policy that stops making crop insurance a major engine of land consolidation and helps farmers deal with the onslaught of climate change. Ninety percent of the survey respondents said they’ve experienced more severe weather events in the past five years; 84% believe these effects are due to climate change.

“My farming operation consists of 950 acres in a corn-soybean rotation,” said LSP Farm Bill Organizing Committee member Adam Griebie, who farms near Hutchinson in central Minnesota. “All of the tillable ground is enrolled into CSP [Conservation Stewardship Program]. CSP gives me the opportunity to participate in conservation practices and become a better steward on my land. I wouldn’t be able to do to these activities without that funding.”

“The Land Stewardship Project works with thousands of farmers throughout the Midwest, and their message is clear — we want a Farm Bill that delivers for rural and urban communities, food system workers and the land,” she said. “We are in a time of unprecedented challenges, and it is time to enact a truly transformative Farm Bill.”

During Tuesday’s event at Legvold Farms, postcards calling for a Farm Bill that supports farmers, rural communities and stewardship of the land were collected by LSP and will be delivered to Minnesota U.S. Representative Angie Craig, who serves on the House Agriculture Committee.