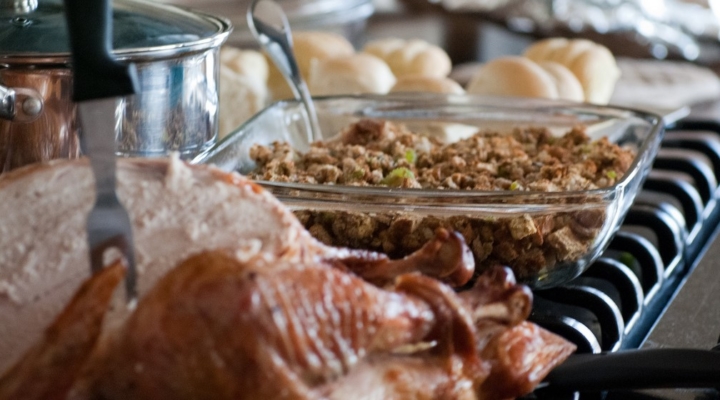 New York Farm Bureau’s volunteer shoppers sampled prices in different regions of the state trying to get the best prices available, but they do not use promotional coupons or special deals such as “buy one-get one free.” (Craig Dugas, Flickr/Creative Commons)

ALBANY — The 2017 Market Basket Survey reveals a nearly 10% price decrease for the average Thanksgiving Day dinner over last year’s meal.  The average total price this year, which includes a 16-pound turkey, is $44.74. This is a $1.89 decrease over last year’s survey of $46.63.

Turkey prices are about $1.34 per pound in New York State, down more than nine percent on average in this informal survey compared to 2016. This drop in price is reflected in national numbers. According to the USDA, wholesale whole turkey prices fell in 2017 and have remained below historical averages since January. Lower retail turkey prices are a result from continued large inventory in cold storage, which is up almost double digits since last year.  The New York numbers also reflect slightly higher pumpkin prices. A wet season led to a smaller pumpkin crop than what we saw last year in New York, though there is no national supply problem due to abundance in pumpkin production in other states that supply pie mix manufacturers. The increase may be attributed to higher production costs. In addition, milk prices have remained low throughout 2017. While this continues to be tough on farmers, consumers have benefited with lower whole milk prices.

New York Farm Bureau’s volunteer shoppers sampled prices in different regions of the state trying to get the best prices available, but they do not use promotional coupons or special deals such as “buy one-get one free.”  The shopping list includes 12 Thanksgiving food items ranging from turkey and rolls to fresh carrots and celery to pumpkin pie mix, enough to feed 10 people around the dinner table. The numbers below reflect the overall average of the volunteer shoppers.

This survey is one of the responsibilities of the NYFB State Promotion and Education Committee which also participates in the American Farm Bureau Federation’s Quarterly Market Basket Survey. AFBF’s 32nd annual informal national price survey of classic items found on the Thanksgiving Day dinner table indicates the average national cost of this year’s feast for 10 people is $49.12, a 75-cent price decrease from last year’s national average. The AFBF survey also factors in $2.71 of miscellaneous ingredients used in the meal’s preparation that are not included in New York’s informal survey. More information on the national survey can be found at www.fb.org.

“The dinner price has dropped for a second consecutive year which means New Yorkers can continue to enjoy a reasonably priced Thanksgiving meal.  While farmers continue to struggle with lower commodity prices across the board, American consumers benefit from lower prices at the cash register. Much of this is due to New York farmers who work hard to produce an abundance of healthy, nutritious food. They take pride in knowing their products help make for a joyous and affordable holiday season,” said Phyllis Couture, Chair of New York Farm Bureau’s Promotion and Education Committee.

Farm Bureau does not make any statistical claims about the survey data, but it is a useful gauge of price trends across New York and the country for shoppers who look to compare prices.

Bringing free healthcare to you at Woodsmen’s Field Days
August 10, 2022