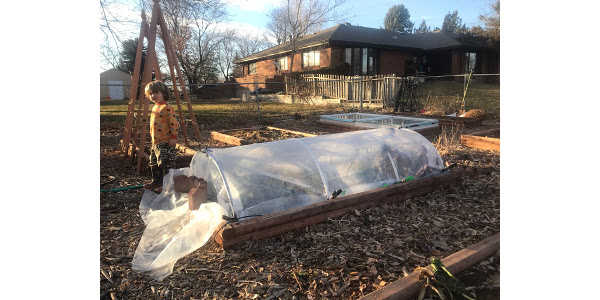 Low tunnel over a raised bed. (Courtesy of Eric Hammond)

BRIGHTON, Colo. — Recently I decided to install a couple of low tunnels in our home vegetable garden. For those who may not be familiar with these contraptions, they are basically a series of short arches placed over a garden bed that are used to support a covering of some type. The idea is to heat the air and soil under the covering during the day then to retain some of that heat, especially the heat radiated by the warm soil, during the night.

We went with a simple design which only required some old rebar we had laying around, PVC pipe and some plastic greenhouse covering we bought online. Essentially, we pounded the rebar into soil at regular intervals along the bed then slipped the PVC pipes over them on one side of the bed.  Each pipe was then bent and slipped over another piece of rebar on the opposite side.  There are formulas available online to  determine the length of the PVC you need form to an arch of a given height but essentially if your beds are three to four feet in width you want to cut the PVC pipe to a length about one foot wider than the bed.  We chose to install four arches per eight foot bed.  We might have been able to get away with three but the more arches you have the better the tunnel will hold up vs. wind and snow.

After installing the arches we placed the greenhouse plastic over them and secured it with clamps.  They make really slick clamps designed specifically for this purpose.  I have ordered some of these but they have not yet arrived.  In the meantime, we are using simple woodworking clamps.

Again this is a simple and inexpensive design and does have some drawbacks.  The PVC pipe will oxidize in the sun and become brittle over time.  Eventually it will have to be replaced.  I’m planning on spray painting the ones we used this summer to extend their life.  There are also stronger designs out there that utilize metal hoops.  A quick internet search will yield lots of interesting designs which are almost certainly stronger and more durable.

So, is it worth the effort?  We have had the tunnels out in our garden for almost two months and for us it certainly has been.  We planted cool season greens, as well as some broccoli, in the tunnels late in February and they germinated incredibly uniformly.  I assume this was due to both more constant and warmer soil temperature under the tunnel and possibly to the elevated humidity in the tunnel.  In the middle of March the afternoon soil temperature under the tunnel was over 10 degrees warmer than the soil in one of our uncovered beds.  We are hoping to use the bump in soil temperature to give an early start to our peppers this year.

The tunnels do require some maintenance and have some limitations.   Chiefly they need be to opened and then closed on warm and\or sunny days to prevent the plants inside from cooking.  In the late spring you will need to do this nearly every day which kind of ties you to garden. The covering also will normally have to be taken completely off once the season gets started and reattached in the fall.   It can be difficult or impossible to get taller crops under the tunnels in the fall.

On the whole though, I think that low tunnels are a great option for many backyard veggie gardeners. They are relatively cheap and easy to install and can be a very effective way of adding a few weeks or more to both ends of the growing season.