Home / New York / Low-tech tools for evaluating tree health
A new user experience is coming! We'll be asking you to login to your Morning Ag Clips account March 1st to access these new features.
We can't wait to share them with you! Read more here. 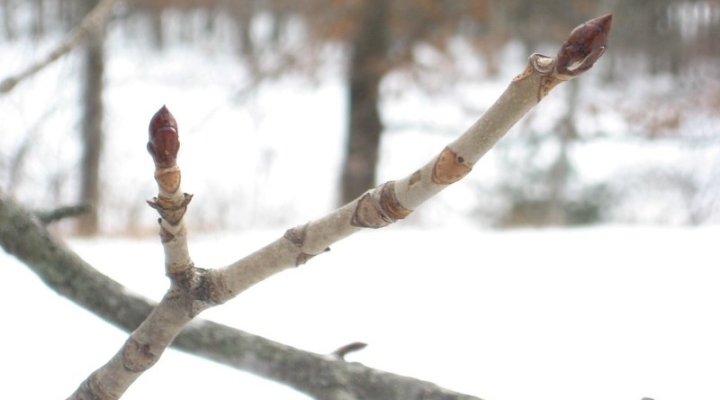 CANTON, N.Y. — It makes sense that dying trees have terminal bud scars. Sounds like an awful condition – my condolences. But the healthiest trees have them, too (terminal scars, not condolences). It’s a good thing, since terminal bud (aka bud-scale) scars provide an excellent way to leaf through a tree’s health records going back 5 to 10 years.

After a woody plant has its full complement of leaves, and they have hardened off, that tree or shrub makes both vegetative buds and flower buds for the following year. Inside each vegetative bud is an inchoate shoot tip, while the reproductive parts are in the flower buds (incidentally, trees have a secret stash of vegetative buds in case of spring frost damage, but no spare flower buds). At the tip of each twig, a woody plant makes a larger bud, the future leader of its respective leaf-dom. When a terminal bud starts to grow in springtime, it leaves behind a ridge of bark around the twig.

You can look down the twig toward its parent stem, and usually find at least five terminal bud scars, sometimes fewer, sometimes more. Reading glasses or a hand lens will help, because older scars are less distinct. The space between each scar is called a node, and it represents the growth from a particular year. It acts as a ruler for arborists and foresters, and it can be for you as well.

Certainly this varies by species, but one would expect to see four to six inches of new growth each year for a twig getting ample sunlight. Yet if you visit a college campus or walk down a busy village street, you’ll discover trees with only a fraction of an inch between terminal bud scars. It might be fair to consider those trees terminal cases.

This information will help you make good decisions about managing your landscape trees, sugar bush, or woodlot. If you notice a consistent lack of good growth, you’ll treat that tree or stand differently. Perhaps a soil test is in order to see if essential nutrients are missing. If you plan to prune a tree with scant growth between scars, prune lightly, no more than five to ten percent of leaf-bearing material. If you’re wondering how foresters collect twig samples from the upper canopy, one of their tools is a handy thing called a shotgun. You have to keep your work interesting.

Another helpful metric when evaluating young trees is something called a trunk flare. Examine the base of any tree. If there is an obvious flare, that’s as it should be. But if the trunk resembles a fence post at the soil surface, those roots are barely able to function. Such trees by definition are suffering. In the case of “fence post” trees, property managers should not apply fertilizer, or prune as if it were a healthy tree. They may, however, be able to remove a few inches of soil and replace it with coarse mulch to help the roots breathe.

Occasionally a young fence-post tree will survive long enough to grow new (adventitious) roots up where they can get oxygen, but it generally won’t thrive the way it could have. It also will be more likely to develop girdling roots, a condition which is exactly what it sounds like. These are roots which began growing in a circular pattern because the burlap was too difficult to penetrate in the first year or two. As the expanding trunk reaches this ring of death, the python-like girdling root(s) chokes the trunk. This typically happens when the trees are two to three decades old. Sidebar: always strip off the burlap once the tree is situated in the hole.

One can see the handiwork of girdling roots along major NYS roads between mid-August and mid-September. DOT-planted trees of that 25-35 age class begin to turn color before surrounding trees of the same type. Once you’re tuned in to this phenomenon, you will see it everywhere you go in late summer and early autumn.

The reason strangled or sick trees are early leaf-shedders is related to their balance sheets. If a tree is being strangled by girdling roots, its sugar factory is less efficient than in other trees of its ilk. Root-girdled trees reach the break-even point earlier than robust trees, and hence they color first.

Now you have a few more ways to evaluate tree health. I hope they can help you keep a few trees from becoming terminal before their time.

Paul Hetzler has been an ISA-Certified Arborist since 1996, and is a member of ISA-Ontario and the Society of American Foresters. His book “Shady Characters: Plant Vampires, Caterpillar Soup, Leprechaun Trees and Other Hilarities of the Natural World,” is available on amazon.com