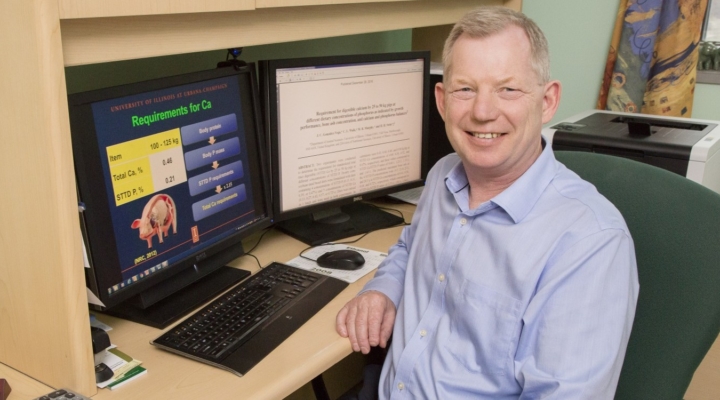 Given greater oil-extraction efficiencies at corn-ethanol plants, the resulting co-products, distiller’s dried grains with solubles (DDGS), are lower in fat. That means less energy for pigs and other livestock consuming DDGS as part of their diet, said Hans H. Stein, professor in the Department of Animal Sciences at the University of Illinois and co-author of a study published in "Translational Animal Science." (Courtesy Photo)

URBANA, Ill. – Given greater oil-extraction efficiencies at corn-ethanol plants, the resulting co-products, distiller’s dried grains with solubles (DDGS), are lower in fat. That means less energy for pigs and other livestock consuming DDGS as part of their diet, according to research from the University of Illinois.

“Fat contains more energy than all the other nutrients. So if you lower fat in DDGS, we would expect the energy to go down,” says Hans H. Stein, professor in the Department of Animal Sciences at the University of Illinois and co-author of a study published in Translational Animal Science.

Along with co-authors Charmaine Espinosa and Su Lee, Stein tested eight sources of low-oil DDGS from feed mills across the Midwest. In one experiment, they fed these DDGS products in corn-based diets to 72 barrows averaging 18 kilograms at the start of the two-week experiment. By analyzing feces and urine from the animals, the researchers were able to quantify how much energy was absorbed and retained in the animals.

Compared to a corn-based diet without DDGS, there was less metabolizable energy in all eight sources of low-oil DDGS.

“We didn’t see a lot of variability among the eight sources, which was a little surprising. There were only two sources that were significantly different from each other in terms of energy. But most importantly, all were lower than corn. In the past, corn and DDGS were considered to have the same amount of energy,” Stein says.

He adds that producers may have to add additional sources of fat in pig diets if using low-oil DDGS. However, according to a separate experiment reported in the study, the ingredient still has value.

In the second experiment, researchers analyzed amino acid digestibility in seven low-oil sources of DDGS. Partially digested material was extracted from the ileum of 24 pigs after a week on the experimental diets.

Stein’s group has studied DDGS for many years, and has chronicled a steady rise in amino acid concentration – specifically lysine – since 2002, indicating an increasingly favorable feeding value as a protein source.

With the combination of lower energy and greater protein in new low-oil DDGS, Stein says he’s not recommending a change to the standard DDGS-to-corn ratio in diets for growing pigs.

“We have said for at least 10 years that you can give 30% DDGS in the diet to growing pigs and sows. After determining the feeding value for low-oil DDGS, we have decided not to change our recommendation,” he says. “However, if diets are formulated to a specific dietary energy concentration, it may be necessary to add a little bit of extra fat to the diets if low-oil DDGS is used.”

The article, “Digestibility of amino acids, energy, acid hydrolyzed ether extract, and neutral detergent fiber, and concentration of digestible and metabolizable energy in low-oil distillers dried grains with solubles fed to growing pigs,” is published in Translational Animal Science [DOI: 10.1093/tas/txz025]. This research was supported by Cargill and POET Nutrition.