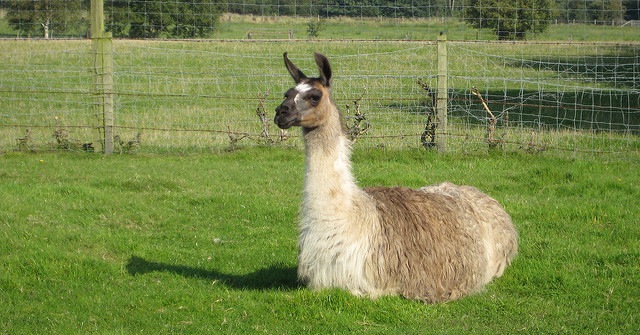 The family refers to the animal as magical and said it's a team effort to raise them. (soapbeard, Flickr/Creative Commons)

RAISIN, Texas (AP) — Seven-year-old Bailey Becak wears black rain boots and sticks her tongue out while pulling a green cart of llama feed. She and her two siblings recently visited their grandparents, Shirley and Robert Hillyer, and their 13 llamas in Raisin.

The Victoria Advocate (http://bit.ly/2oi5esm ) reports the Hillyers acquired their first taste for llama in 2000, when they were at an exotic pet auction. Focused on keeping an eye on their children, Shirley Hillyer didn’t notice her husband bidding on what he thought was a llama.

“It turned out that it was a guanaco, which is like a wild animal like a coyote would be or a wolf would be to a dog, it’s a wild llama,” Shirley Hillyer said.

After purchasing his new pet, Robert Hillyer stood in the stall with the animal, and when others saw what he was doing, they informed him that they considered the guanaco the wildest animal at the show. Shirley Hillyer said that’s when her husband told them that if it’s going home with him, then it better get used to him — and then he spit on it.

“And the animal never spit on us, and it was a very sweet, gentle guanaco,” she said.

Unplanned, the couple and their four children went to U-Haul and rented a trailer to take the animal on a four-hour drive back home.

Since then, it isn’t uncommon to see grandchildren walking around with range cubes clenched in their teeth as they try to lure one of the giant animals to take it from their mouth, just as their parents did when they were children — a family tradition.

The guanaco died when his lung was punctured after being kicked by a horse but the love for llamas continued. Soon afterward, the Hillyers bought three more llamas.

Now the couple sells an occasional animal but also takes their llamas to library events, church nativities and retirement homes for educational purposes.

Another benefit of the pet is they are guard animals and can look over livestock.

“Llamas can run about 35 mph,” Robert Hillyer said. “They will actually run down and overpower a coyote or a stray animal and they have toes in front that are pointed in front in their pads and they’ll actually roll that animal and probably spear it to death or probably stomp it to death or at least chase it off the property by roughing it up some.”

The family refers to the animal as magical and said it’s a team effort to raise them.

The duo has been married for 37 years, has raised four children and has worked together to properly care for their pets.

“It hasn’t always been wine and roses, sometimes it’s sticker burs and thorns, but it’s a team effort, and we’ve made it work,” Shirley Hillyer said.

Information from: The Victoria Advocate,http://www.victoriaadvocate.com