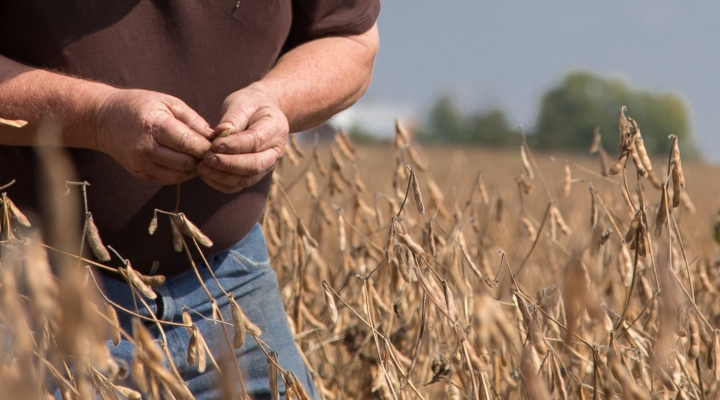 "We have no home for our soybeans. They're only taking the least damaged beans and I don't have a single bushel I can ship or sell," Acadiana producer Richard Fontenot, a vice president of the Louisiana Farm bureau Federation, told The News Star of Monroe. (United Soybean Board, Flickr/Creative Commons)

BATON ROUGE, La. (AP) — The trade disputes with China are hurting Louisiana’s soybean farmers at a time when rain during harvest season has also hit them badly, a Republican congressman from the state said, asking the federal government for help.

Many soybean shipments are being sent down the Mississippi River instead of the West Coast, filling storage silos and leaving “little to no space to take in any additional, locally grown crops,” U.S. Rep. Ralph Abraham wrote in a letter Tuesday asking U.S. Agriculture Secretary Sonny Perdue to find a way for the Department of Agriculture to help the farmers.

Soybeans were a big target of tariffs imposed by China in response to those imposed by the Trump administration.

“Many of my farmers who have grown late soybeans are being told by elevators that unless the soybeans were previously booked or are of uncommonly superior quality, they cannot and will not accept them. … Farmers must choose between harvesting soybeans with no place to bring them, or letting them rot in the fields,” Abraham wrote.

Louisiana’s soybean acreage this year was about 1 percent of the U.S. total.

In Indiana, state agriculture officials said this week that farmers may see storage problems amid forecasts of higher-than-average yields and lingering tariffs from President Donald Trump’s trade disputes with China.

Soybeans must be harvested and sold to qualify for tariff relief under the $12 billion rescue package announced in July.

“We have no home for our soybeans. They’re only taking the least damaged beans and I don’t have a single bushel I can ship or sell,” Acadiana producer Richard Fontenot, a vice president of the Louisiana Farm bureau Federation, told The News Star of Monroe.

Fontenot said he has been able to harvest only 600 acres (240 hectares) out of 1,700 acres (690 hectares) of soybeans planted, and has nowhere to send those. The rest will rot in the field, he said.

This is the second straight year that a rainy stretch during harvest season has devastated Louisiana’s big soybean crop, said Todd Spivey, a soybean expert with the LSU AgCenter. Rains in late September kept farmers from harvesting ripe soybeans, which are now badly damaged, he said.

Last year, Spivey said, damage was from the lingering effects of Hurricane Harvey.

“Because of this wet weather, many producers have not been able to harvest a crop that has been ready to harvest for as long as three weeks,” he said in a news release Tuesday. “This extended period of wet conditions has reduced grain quality tremendously, with samples harvested by producers being graded with as much as 60 percent total damage. This has led to countless acres that will go unharvested in 2018.”

Current damage includes weather-damaged kernels, mold and sprouting, depending on the stage of the soybean when the poor conditions began, Spivey said.

Producers are also having trouble selling what has been harvested. Spivey said many grain elevators have limited the amount of acceptable damage to 5 to 7 percent. Soybeans graded below that are being rejected.

Abraham asked Perdue on Tuesday to help farmers find places to store the current harvest until it can be sold.

“I urge you in the strongest terms to utilize the significant resources of the U.S. Department of Agriculture to find a way to bring relief to these farmers, whose only role in this unfolding disaster was to raise a record-setting crop of soybeans at a time when unprecedented trade actions have caused widespread disruption in the agricultural economy,” he wrote.

38 sick from tainted eggs from Alabama