Home / South Carolina / Looking for answers to loss of bees 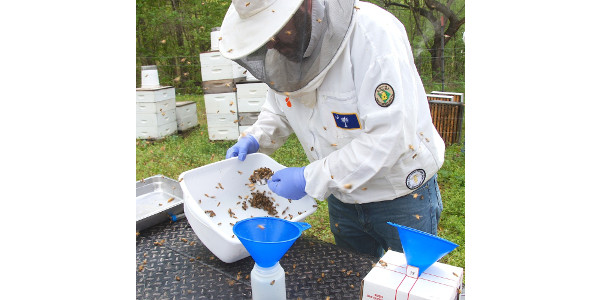 State apiary inspector Brad Cavin scoops a sample of bees from a Greenville County hive to be tested as part of the National Honey Bee Survey. (Image Credit: Clemson University)

TRAVELERS REST, S.C. — With every scoop of bees Brad Cavin pours gently into a cardboard box he brings science one step closer to unraveling the riddle of honey bee decline.

At an apiary near the foot of the Blue Ridge, Cavin gathered samples of honey bees — live ones, dead ones, their unborn brood and the pollen the bees collect — as he has from hives all across the Palmetto State this spring.

The samples, live bees included, will be mailed to U.S. Department of Agriculture labs as part of the National Honey Bee Survey, a program created to help scientists and beekeepers learn how to better protect the important pollinating, honey-making insects.

“The whole point of the survey is to find out what’s happening to our bee population,” says Cavin, state apiary inspector for the Department of Plant Industry, a regulatory arm of Clemson University that helps protect South Carolina’s agricultural resources.

“Beekeepers need to know what threats their bees face and learn what signs to look for,” Cavin said, “We’re conducting the survey in an attempt to document which diseases, parasites or pests of honey bees are present.”

Begun nationally in 2009 and an annual study in South Carolina since 2012, the honey bee survey seeks hard, statistical data that may help shed light on the reasons for the growing loss of honey bee colonies in the United States, according to USDA. The Animal and Plant Health Inspection Service, which coordinates the data from state surveys like Clemson’s, describes it as a form of epidemiology for bee health.

For beekeeper Tim Dover, who manages nearly 700 hives among the farms and fields at the foot of the Blue Ridge, the bee survey is essential intelligence about the enemies of his bees.

“The survey gives me a snapshot of the health of my apiary. I know exactly what’s in my hives. If there’s a virus problem I can treat before it becomes an issue,” Dover said. “Without it, we could have a problem and not know about it until it’s too late. The feedback we get as beekeepers makes us better stewards.”

Dover, who with partner Susan Gardner owns the Carolina Honey Bee Company in Travelers Rest, “retired from the high-tech industry in the dot-com bust” more than a decade ago, giving him the chance to return to his rural roots: He’s a third-generation beekeeper whose grandfather’s bees were ancestors of some of his hives today, a genetic line he received from his uncle.

“Some of these bees have been with our family for a hundred years, or at least their genetics have,” he said. “That gives them a special significance, I think. It’s a reminder of the historic importance of producing our own food.”

Most of their homegrown product is sold from their store on Main Street in Travelers Rest, where they have a certified commercial kitchen nearby to prepare the honey to state specifications. But a large share of Carolina Honey Bee Company’s revenue comes from selling the supplies their fellow beekeepers need: frames, tools, extractors and even “package bees” to help new beekeepers begin their hives.

“With all the news about colony collapse disorder, it’s driven a lot of people into the business,” he said. “None of us wants the bees to disappear. We want to be able to continue to produce the food we eat right here.”

USDA estimates that winter losses of honey bees has increased from 22 percent to 36 percent in the past eight years, a rate that the agency believes is unsustainably high. Suspects in the decline in bee health are many — pests like the Varroa mite, a parasite that carries deadly viruses; diseases like American foulbrood, a spore-borne affliction that keeps unborn bees from developing; toxins like pesticides; poor nutrition from loss of habitat; and invasive pathogens that have found their way from other countries to the United States.

Finding the exact causes of bee loss, USDA scientists believe, is essential to preserving the bee industry, which — not including the honey we eat — provides $15 billion each year in added crop value from pollination.

Dover hopes the honey bee survey will help provide information that will help the beekeeping business thrive. He said he’s encouraged that the sampling and testing address both native pests and diseases as well as invasive threats to honey bee colony health.

The survey requires Cavin to take samples from hives in two dozen locations statewide each year. In each of those places, he’ll have to take four different samples from eight different hives in an apiary:

To gather the required data, the tests are necessarily invasive to the honey bee hive. For this reason, Cavin tries to build a close relationship with the beekeepers who know their hives best.

On this particular spring afternoon, he and Dover work together to open hives in search of finding appropriate samples, being careful not to disturb the queen bees that are vital to a hive’s reproduction.

Patient and skilled manipulation keeps the bees relatively calm. The ubiquitous hum of their collective buzzing fills the corner of the pasture that shelters the two dozen white, wooden hives. But as distant thunder rumbles and a spring rain begins to fall, the hum of the bees begins to rise. A horse tied to a stall in an adjacent barn eyes the activity carefully, but without alarm.

“The bees don’t like the rain,” Cavin explains. “They’re already a little upset at being disturbed. You want to try and minimize their anxiety.”

With hand-held “smokers” — cans filled with burning wood chips and spouts at one end to direct the smoke — Cavin and Dover keep the bees relatively docile as they open and examine each hive. One by one, Cavin and Dover remove honeycombed frames from the hives in search of their samples. By the end of the afternoon, Cavin has packed and labeled the containers for shipment to the labs.

Like beekeepers and scientists across the country, Cavin and Dover await results that can be used to protect the bees — knowledge that can help solve the mystery of honey bee decline.

“Of all the things I like about beekeeping is that you’re always learning. You never know it all,” Dover said. “I learn something new every time I get in a hive. The more I learn the more I find out I don’t know.”