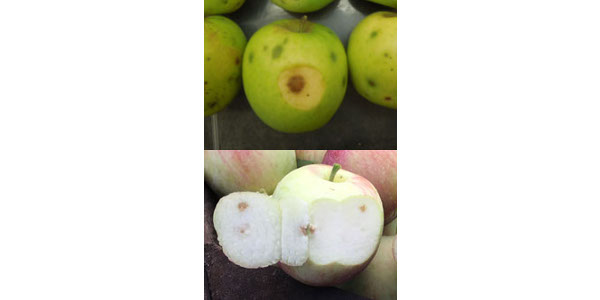 EAST LANSING, Mich. — Apples are susceptible to a number of different defects that appear close to harvest. Previously, bitter pit had no rivals that could be mistaken for it. Now, there are two insect pests—an old one and a new one—that can cause injury easily mistaken for bitter pit and vice versa.

Bitter pit is a disorder associated with nutrient imbalance in developing apples. Some cultivars – Honeycrisp in particular – are more prone to bitter pit than others. The symptoms are shallow depressions, mainly confined to the calyx or flower end of the apple, with internal corking below the surface that does not meet the skin (see photos below). Within a given orchard of a susceptible cultivar, bitter pit can show up anywhere in the orchard, not just at the edges. This is an important contrast with where you are most likely to find damaged apples from apple maggot stings or stink bug feeding in an orchard.

Prior to the broader use of systemic insecticides in apple orchards against internal fruit pests, when the apple maggot slipped through the cracks of a spray program and started laying eggs, fruit would be obviously wormy. Now when a treated apple is stung by a female apple maggot laying an egg, the egg will fail to develop and instead will leave behind an injury that looks much like bitter pit or feeding damage by stink bugs.

Unlike bitter pit damage, injury from apple maggot stings can occur anywhere on the apple. If you have an orchard block with a history of apple maggot and you or your field scouts are not using monitoring tools to know whether apple maggot populations are increasing, you may find injury of this type in your orchard in the late season (see photo below). Concentrate your search for damage along orchard edges near wooded borders where apple maggot is most likely to occur. Unlike bitter pit damage, brown marmorated stink bug feeding damage can occur anywhere on the apple or may be most common around the shoulder. Also, the internal corking caused by the stink bug’s injury will meet the skin, whereas bitter pit corking will not.

Most of the damage from brown marmorated stink bug will occur in trees along orchard edges that are bordered by woods, peach orchards, or soybean fields (for a list of other crops favored by the pest, see the BMSB report from August 1, 2017). Field scouts should be using limb-jarring over beating trays to monitor for brown marmorated stink bugs in orchard edges. Traps baited with lures set up between woods or other crops and the target apple orchard can also help determine whether this pest is moving into orchards and potentially causing damage. What damage from exploratory feeding by stink bugs looks like mid-season in apple. Photo by Amy Irish-Brown, MSU Extension. It’s easy for the eye to pick out damaged fruit and to over-estimate how much of the fruit is damaged across an orchard or in a harvest bin. To get a true estimate of fruit damage in a given orchard or orchard margin, it is important to randomly select fruit for inspection, as opposed to seeking out and counting only fruit with damage. Select 50 or 100 fruit and count how many are damaged to estimate overall fruit damage in a given area. Taking into consideration the cultivar and its susceptibility to bitter pit while monitoring for apple maggot and brown marmorated stink bug will help with making the right management decisions in the future.

Use of byproduct lime on agricultural soils