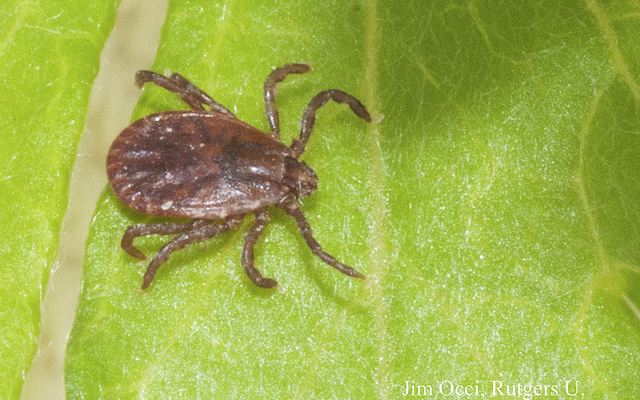 A new species of tick has found its way to North Carolina. Recent tick surveys sent to the U.S. Department of Agriculture found the Longhorned tick (Haemaphysalis longicornis) on an opossum in Polk County. The tick has been previously identified in Arkansas, New Jersey, Virginia and West Virginia. (photo by uacescomm, creative commons/flickr.com)

RALEIGH, N.C. –  A new species of tick has found its way to North Carolina. Recent tick surveys sent to the U.S. Department of Agriculture found the Longhorned tick (Haemaphysalis longicornis) on an opossum in Polk County. The tick has been previously identified in Arkansas, New Jersey, Virginia and West Virginia.

“We are working with the USDA, N.C. Department of Health and Human Services, N.C. Wildlife Resources Commission, our field staff and veterinarians to help raise awareness of ticks and tick prevention,” said Agriculture Commissioner Steve Troxler. “The good news is that the Longhorned ticks respond to insecticides used to control other common species of ticks on pets and livestock.”

The Longhorned tick is an exotic, East Asian tick. Prior to its identification last fall in New Jersey, the Longhorned tick was not typically found in the United States. It is a serious pest of livestock in its native regions and the means of introduction into the U.S. is unknown. Its presence in N.C. signals the need among livestock producers and residents for greater awareness, surveillance, and tick control management. It is an aggressive biter and frequently builds intense infestations on animals causing great stress, reduced growth and production, and blood loss. The tick can reproduce parthenogenetically (without a male) and a single fed female tick can create a localized population. It is a known/suspected carrier of several viral, bacterial and protozoan agents of livestock and human diseases. Known as a three-host tick, this tick can spread pathogens among a diverse host range on which it feeds.

While the Longhorned tick has not been linked to any human infection in the US, the N.C. Division of Public Health is working with NCDA&CS to understand its distribution and monitor for diseases it may carry. The finding of this tick in the state corresponds with an effort by the N.C. Department of Public Health to identify ticks in all 100 counties of the state. Veterinarians are asked to submit ticks they find on clinical patients to help track and identify tick populations in North Carolina. If you are a veterinarian practicing in North Carolinaand are interested in participating in this study, email Dr. Alexis M. Barbarin at NCTickID@dhhs.nc.gov.

Ticks attack all domestic animals, wildlife and people. The best way to control diseases spread by ticks is early removal. Prevention remains the best method to deter tick-borne illnesses. Showering immediately once you return home and checking for ticks can help to deter tick attachment.Protect yourself while outdoors by wearing long clothing, wearing permethrin-treated clothing, and using DEET, picaridin, and other EPA approved repellants. Finally, talk to your veterinarian about options to treat your pets and livestock for ticks.