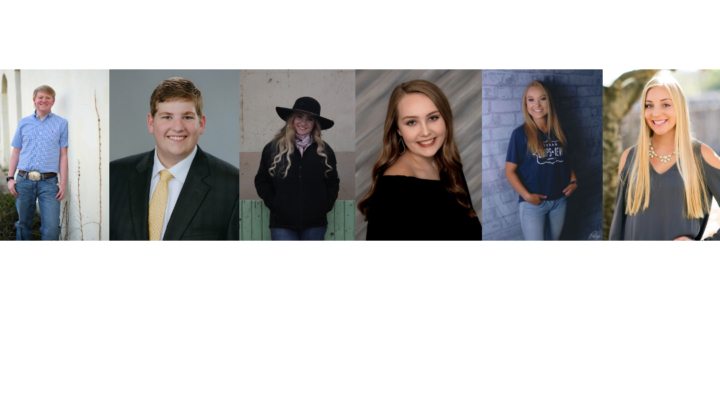 Scholarship applicants each completed a two-page essay on the topic, “My plan for a career in agriculture.” All six students were involved in youth organizations and served their communities in many ways:

Jake Bagby, a senior at Stephenville High School, is heading to Texas Tech University this fall to study animal science with an option in meat science. During high school, he was the Area IV FFA president and Stephenville 4-H president. A Lone Star FFA Degree recipient and Texas 4-H Record Book finalist, he also earned several awards in meat judging. Bagby is an avid market goat and market lamb exhibitor, who qualified for many major livestock show sales. He aspires to have a career in the meat industry.

Trevor Burke is a senior at St. Mark’s School of Texas. He will attend college this fall to study environmental engineering. In high school, Burke was an active member of the Boy Scouts, earning the rank of Eagle Scout with 23 Palms. He was the 2018 Texas Eagle Scout of the Year. Burke has been involved with the Northern Bobwhite Quail Reintroduction Project at the Lewisville Lake Environmental Learning Area. He plans to pursue a career in environmental science.

Gracen Dach, a senior at C.H. Yoe High School, will study poultry science at Texas A&M University this fall. During high school, she served as vice president of the Yoe FFA Chapter, and was a member of the National Honor Society and student council. She earned a Lone Star FFA Degree and was a member of several FFA teams, including public relations, livestock judging and horse judging. An honor student, Dach also was named Academic All-District and Academic All-State in volleyball. She aspires to be a poultry geneticist.

Autumn Gallagher is a senior at Aubrey High School. She will attend Texas A&M University-Commerce this fall to pursue a degree in agricultural accounting. During high school, she was a member of the Aubrey FFA chapter and the school’s student council. Gallagher also played varsity softball and competed in Texas High School Rodeo Association pole bending and barrel racing events. She founded a girls’ mentoring group at her high school and volunteered for the Salvation Army. Gallagher plans to work as an accountant in the equestrian industry.

Kaylee Kramer, a senior at Harper High School, is heading to Texas A&M University this fall to study agribusiness. In high school, she was president of the Harper FFA chapter, president of the Harper 4-H Club and vice president of the school’s National Honor Society chapter. She earned a Lone Star FFA Degree and several awards in livestock judging, land judging, radio broadcasting, track, cross country and cheer competitions. She aspires to be an agricultural consultant on land management and crop production.