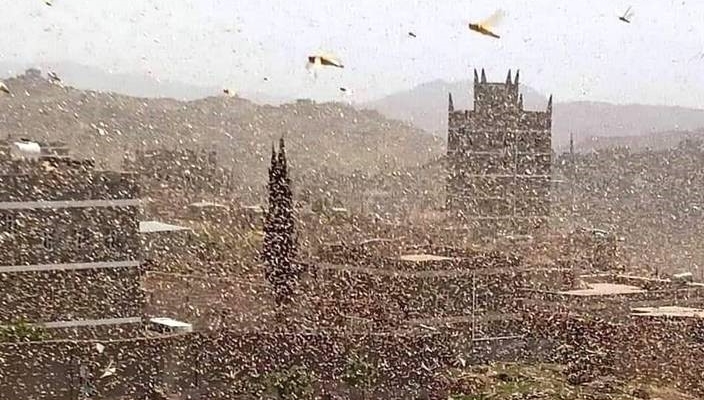 A mature swarm flying over a village near Abyan, Yemen, looking for suitable areas to lay eggs that will hatch after about two weeks. (FAO)

ROME — Desert Locust summer breeding, amplified by heavy rains, can pose a serious threat to agricultural production areas of Yemen, Sudan, Eritrea and parts of Ethiopia and northern Somalia during the next three months, FAO warned today. This could result in potentially adverse impacts on the agricultural seasonal yields and local economies affecting food security and livelihoods of the populations in the countries concerned.

Intensive ground and aerial control operations were mounted in Iran (712 000 ha), Saudi Arabia (219 000 ha) and Sudan (105 000 ha) this year that undoubtedly reduced locust populations but could not entirely prevent swarms from forming and moving to the traditional summer breeding areas in Yemen, Sudan, the Horn of Africa and along both sides of the Indo-Pakistan border.

There is a moderate to high risk of the Desert Locust situation escalating further in the interior and coastal areas of Yemen and in the interior of Sudan, causing swarms to form that would threaten agricultural production by the end of the summer. This will be followed by further increases along both sides of the Red Sea during the upcoming winter from November onwards.

Yemen, the world’s current worst humanitarian crisis, is the most concerned and at highest risk because of widespread hopper band infestations and heavy rainfall that will cause swarms to form from this week onwards, which could give rise to another generation of breeding by the end of August if weather conditions remain favourable to locust breeding.

In the worst-case scenario, swarms could migrate from Yemen in the autumn to the Horn of Africa and reach Kenya by the end of the year, unless urgent preventive and control measures are established in the region. Desert Locust swarms last invaded Kenya in 2007 and aerial control operations were required to bring the situation under control.

In northeast Somalia, mature swarms were seen at several locations during the past weeks, causing substantial crop damage. Hopper bands are now forming along the northwest coast and probably in the northeast from eggs laid by the swarms. This could give rise to new swarms by about late August.

Similar breeding is expected to occur in eastern Ethiopia while groups of adult locusts may move from the northern region of Amhara to the summer breeding areas in western Eritrea and the interior of Sudan.

In Sudan, high numbers of adult populations are present in the Nile Valley while scattered adults appeared recently on the Red Sea coast and in North Kordofan where summer breeding will occur.

After becoming airborne, swarms of tens of millions of locusts can fly up to 150 km a day with the wind. Desert Locusts (Schistocerca gregaria) live about three months, and a female locust lays about 300 eggs. A Desert Locust adult can consume roughly its own weight in fresh food per day — about two grams every day. A very small swarm eats the same amount of food in one day as about 35 000 people.

Urgent action needed to prevent the spread and save crops

Urgent Desert Locust control operations are required to safeguard crops and mitigate the risk of infestation in Yemen, as well as to prevent locust swarms from invading the neighbouring countries.

In Yemen, survey and control operations are hindered by insecurity in locust breeding areas and insufficient capacities such as equipment and operating funds. To partially address this, FAO has rapidly mobilized $100 000, thanks to a contribution from Belgium through the Special Fund for Emergency and Rehabilitation Activities (SFERA), and $200 000 from its own resources to mount a much-needed anti-locust campaign. FAO is already implementing a number of urgent measures to support surveillance and control operations in the breeding areas.

The UN agency  has also initiated the process of purchasing additional equipment to increase the capacity of the Ministry of Agriculture to enable timely control of locust in the infested areas. In addition, FAO has launched a general appeal to the international community.

The primary beneficiaries are farmers, livestock breeders and nomads who live in the Desert Locust infested areas, and whose livelihood will be protected from the damages that the increased locust infestations would cause to agricultural production and pastures. The assistance will help around 100 000 people in Lahij, Shabwah, Hadramout, Abyan, Sana’a and Al-Hodeidah provinces in saving their crops, thus preventing crop losses, which can result in increased hunger and poverty in rural areas that are already impacted by ongoing conflict.

While Sudan is much better equipped and prepared than some other countries in the region, the current political situation in the country may reduce the effectiveness of operations this summer. Capacities in Eritrea, Ethiopia and northern Somalia also remain relatively limited.

Given the seriousness of the current locust situation, all countries must monitor the field conditions by mounting regular ground surveys and undertaking the necessary control measures whenever important locust infestations are detected.

FAO operates a Desert Locust Information Service that receives and analyzes data from locust-affected countries to assess the current locust situation, provide forecasts and if necessary issue warnings and alerts in order to keep the global community informed of locust developments and threats.