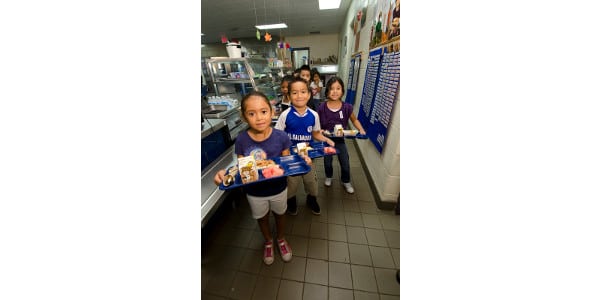 For those interested in donating beef to their local schools, KBC can assist in connecting producers with their local beef processing facilities. (USDA photo by Lance Cheung via Flickr)

“With the federally mandated regulations that have been imposed over the last several years, we were seeing more prepackaged food being served (in the school lunch program),” Brokes says, “We thought if we could put more beef on the menu it would be a win-win for everyone.”

After gaining local support, Brokes contacted the Kansas Department of Education’s Farm to School program, where the effort was also was met with support. Brokes says implementation of the program was easy to get started because of the number of producers and families excited to be a part of the initiative.

The donation process is simple: producers donate and transport the live animal to a local processing plant. The school district is responsible for informing the processor of which cuts to provide, typically hamburger and roasts. The district is also responsible to pay for processing and transporting the meat from the processor to the school freezers.

“For us, the biggest thing was being able to give our (district’s) kids the highest quality of protein. And we are raising that right here in Ellsworth County,” Brokes says of the program’s success. To date, four families in the district have donated live animals, and the program has garnered statewide attention, as Brokes shares. “This program is new to USD 112 Central Plains, but the beef donation model is being implemented throughout the state,” she says.

In addition to local efforts led by ranchers such as Michelle, the Kansas Beef Council (KBC) team and the Kansas Corn Commission partner annually with Kansas high school and middle school FCS foods classes for the purchase of beef used in classes and teaching labs. This allows those teachers to be reimbursed for utilizing beef while cooking during classes. Last year, over 15,000 students at roughly 116 schools were impacted by this program.

For those interested in donating beef to their local schools, KBC can assist in connecting producers with their local beef processing facilities. To learn more about beef nutrition, including lean cuts of beef, and emerging human nutrition research visit: www.kansasbeef.org.

About the Beef Checkoff
The Beef Checkoff Program was established as part of the 1985 Farm Bill. The checkoff assesses $1 per head on the sale of live domestic and imported cattle, in addition to a comparable assessment on imported beef and beef products. States may retain up to 50 cents on the dollar and must forward the other 50 cents per head to the Cattlemen’s Beef Promotion and Research Board, which administers the national checkoff program, subject to USDA approval.