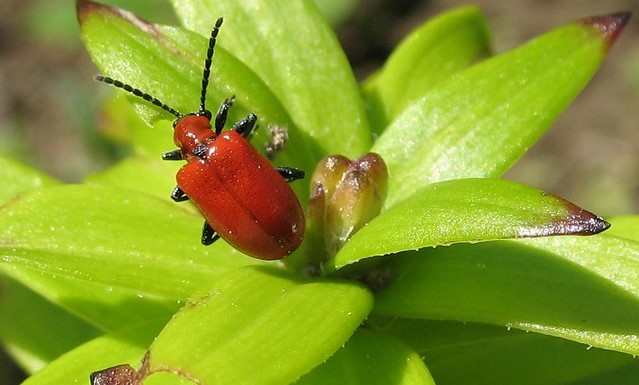 Adult LLB range from 6 to 9 mm (1/4 to 3/8 of an inch) long, and have prominent antennae. The adults, which overwinter in the soil, start feeding as soon as the lilies begin to appear. (Gilles Gonthier, Flickr/Creative Commons)

CANTON, N.Y. — The lily, native around the world in the temperate parts of the northern hemisphere, has been an important cultural icon for millennia. Depending where you stand on the globe, it can represent humility, purity, unbridled sexuality, the Province of Québec, wealth, or a thriving garden, to name but a few possibilities.

The flower is mentioned in The New Testament, such as in Matthew 6:26: “Behold the lilies of the field: They toil not, they spin not; and yet I say unto you, that Solomon in all his glory was not arrayed like one of these.” The message, as I understand it, is that one should not waste energy worrying how to clothe oneself, because even wild lilies are garbed well.

Unfortunately, northern New York State has a relatively new pest which specializes in denuding lilies. The lily leaf beetle (LLB) is a fiery-red native of Asia and Europe which has a voracious appetite for true lilies, those in the genus Lilium, as well as for their relatives the fritillaries (LLB does not eat day lilies). First found in NY State in 1999 by two Cornell Master Gardeners in Clinton County, the lily leaf beetle has slowly spread across NY State over the past 20 years, much to the dismay of flower enthusiasts.

Adult LLB range from 6 to 9 mm (1/4 to 3/8 of an inch) long, and have prominent antennae. The adults, which overwinter in the soil, start feeding as soon as the lilies begin to appear. They mate, lay eggs and die early in the season, but their larvae soon emerge to wreak more havoc. At roughly 12 mm or a half-inch when full-size, LLB larvae can be yellow or orange, but you’d never know it because they smear their poop all over themselves to deter predators. It is a strategy that works well on gardeners, and somewhat on birds. Later in the season, the larvae pupate and emerge as beetles, which again go after the poor lilies. It has gotten so bad that some gardeners have given up on lilies.

But in St. Lawrence County, a few lily growers have successfully fought back and won. In 2015, Dr. Paul Siskind, a Musicologist by training as well as a Cornell Master Naturalist, wanted to find the best organic spray to control this novel pest. To his surprise, Siskind found there had been little research done on LLB, and none at all on his topic of interest. He devised a study comparing the effectiveness of common organic products, and also recorded relative numbers of LLB found on four different strains of lilies to see which were preferred by LLB.

The short story is that a product called Spinosad, made of compounds produced by certain bacteria, provided good control of lily leaf beetles. Though it is less toxic than many other insecticides, always follow label directions. Neem oil, derived from a tropical tree, is listed as effective against LLB larvae, but Dr. Siskind found that only neem products which were labeled “cold-pressed” had any effect. Diotomaceous earth, often suggested as a control, had a negligible impact on LLB.

Hand-picking, unpleasant though it is, can also provide good LLB control, and is the cheapest and safest option by far. Guy Drake of Heuvelton, a longtime producer of perennial flowers and shrubs, believes that you want to beat LLB, you simply have to “garden up,” in his words. Guy, who can be found at the Canton Farmers’ Market twice a week, told me that the scarlet-red beetle devastated his lily selection when they first showed up at his place several years ago. The following year he began to diligently scout for LLB eggs, larvae and adults every morning. Since then, he has been virtually beetle-free.

The secret, he explained, is to hand-pick very early in the morning. The reason it’s essential to get out early is because adult beetles have a unique defense mechanism. As soon as you approach, they drop off the plant, land upside-down on the ground, and lie still. Though red on top, underneath they are tan, making them almost impossible to find. But in the cool of early morning, he says they don’t move, and can be easily swept into soapy water or crushed.

In the long-term, biological controls may keep LLB populations so low that they cease to be a threat to lilies. In 2017, the NYS Integrated Pest Management (NYS IPM) program at Cornell’s College of Agriculture and Life Sciences, in conjunction with Cornell Cooperative Extension, released three species of tiny parasitic wasps in Putnam and Albany Counties, as well as on Long Island. Researchers from NYS IPM say that it will be a slow process, but they are optimistic that natural LLB control will happen in the coming decades.

In the meantime, we’ll need to help lilies keep their splendid garments from being consumed by lily leaf beetles. Garden up, everyone!

Begin scouting for cankerworms
May 4, 2020