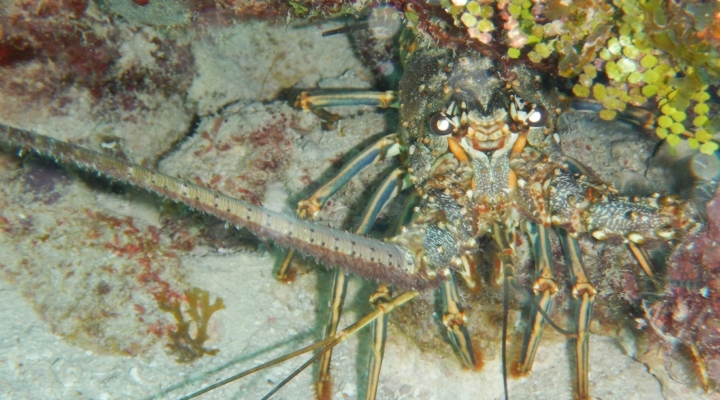 GAINESVILLE, Fla. — As dawn approaches, spiny lobsters in the Florida Keys are in search of shelter — a hole, a crevice, any place where they can safely spend the daylight hours. If shelter is scarce, lobsters will often congregate in the same hiding place, and they don’t mind the occasional spider crab as a roommate.

But if a shelter is already occupied by a stone crab and its fierce pincers, the lobster will beat a hasty retreat, according to a recent study by researchers with the University of Florida Institute of Food and Agricultural Sciences.

These findings have significance for Florida’s multi-million dollar spiny lobster industry. Lobsters seek hiding places to avoid predators, so competition with stone crabs can impact lobster survival rates, according to the study.

“Our findings definitely have implications for the lobster fishery. Good years for stone crab reproduction that lead to more juvenile stone crabs could suppress the abundance or survival of juvenile spiny lobsters where their habitat needs overlap,” Behringer explained. “Our data suggest that this could happen, but would require further research to confirm.”

While spiny lobsters often congregate with each other, lack claws and tend to be non-aggressive, stone crabs are the opposite. “Stone crabs are solitary and have massive claws that they can use for antagonistic or aggressive behaviors,” Behringer said, which explains why lobsters shy away from stone crab encounters.

Field experiments in the Florida Keys showed that the more stone crabs in an area, the fewer juvenile spiny lobsters, and vice versa. Lab experiments likewise demonstrated that lobsters prefer shelters without stone crabs and even keep clear of shelters that smelled like stone crabs.

Florida’s spiny lobsters attract thousands of fishing enthusiasts each year. This year, the recreational season opens with a two-day sport season July 26 and 27, with commercial fishing starting Aug. 6 and continuing through March.

In 2015, Florida’s commercial lobster harvest was valued at $47 million, according to the Florida Department of Agriculture and Consumer Services website.

Working for a citrus greening treatment

Training offered on ‘Signs of the Seasons’ in Maine
March 9, 2020