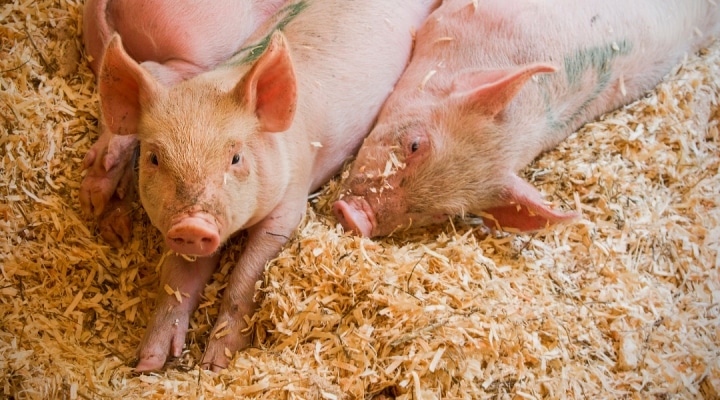 "Livestock-associated MRSA is a strain of MRSA that is especially infectious among animals. Now it has evolved to infect humans as well," said Michigan State University's Felicia Wu. "Bacteria have shown an amazing ability to jump across species to colonize and cause infections." (liz west, Flickr/Creative Commons)

EAST LANSING, Mich. — For Michigan State University’s Felicia Wu, the surprise isn’t that people who work with livestock are at higher risk of picking up antibiotic-resistant bacteria, but instead how much higher their risk levels are.

“This is a bit of a wakeup call,” said Wu, John. A Hannah Distinguished Professor in the Departments of Food Science and Human Nutrition and Agricultural, Food and Resource Economics. “I don’t think there was much awareness that swine workers are at such high risk, for example. Or that large animal vets are also at extremely high risk.”

Compared with individuals who don’t work with animals, those working on swine farms are more than 15 times more likely to harbor a particular strain of a bacterium known as methicillin-resistant Staphylococcus aureus, or MRSA, acquired from livestock. For cattle workers, that number is nearly 12. For livestock veterinarians, it approaches eight.

Wu and Chen Chen, a research assistant professor in the Department of Food Science and Human Nutrition, published their findings, along with the risk factors for other related professions, in the journal Occupational & Environmental Medicine. Their paper highlights these elevated risks, what farmers can do to protect themselves and what we understand about the public health burden posed by livestock-associated MRSA.

“Livestock-associated MRSA is a strain of MRSA that is especially infectious among animals. Now it has evolved to infect humans as well,” said Wu, who was recently named a fellow of the Society for Risk Analysis. “Bacteria have shown an amazing ability to jump across species to colonize and cause infections.”

Livestock-associated MRSA is a zoonotic disease, a disease that can transmit between animals and humans. Such diseases can have devastating consequences for human health. The novel coronavirus pandemic, for example, was caused by a virus that likely originated in bats.

Although the novel coronavirus and livestock-associated MRSA work and spread in different ways, they both are a reminder that when people understand the risks posed by such diseases, they do have some power to minimize them. For example, good hygienic practices and policies supported by science can make meaningful differences, especially in the case of livestock-acquired MRSA, Wu said.

“The final message is that we need to protect our health and the health of our animals,” she said. “We don’t have control over bats, but we do have some level of control over how we raise and handle our poultry, cattle and swine.”

Although it’s possible to carry MRSA without it becoming a problem, the bacteria can cause serious infections when given the chance. Livestock-associated MRSA was first documented in the early 2000s and appears to be less dangerous to humans than MRSA that evolved in health care settings, where it built up defenses against a range of antibiotics.

The livestock-associated strain also appears to be less prevalent than community-associated MRSA, caused by bacteria lurking in gyms, schools and workplaces, which are typically more treatable than their counterparts found in hospitals and doctors’ offices.

For these reasons, livestock-associated MRSA doesn’t garner as much attention as other strains, but there’s still much to learn about the bacteria from livestock and their impact on human health, Wu said. When she first came to MSU in 2013, she became interested in how the growing problem of antibiotic resistance was being influenced by bacteria that jumped to humans from livestock.

“We don’t understand how much of that problem we have in human populations,” said Wu. “This particular paper is trying understand one aspect of that.”

To calculate the risk levels of acquiring livestock-associated MRSA, Wu and Chen combed through 15 years of published literature, extracting data about the likelihood of people acquiring the bacteria based on their livestock-related profession. The risk was elevated for every occupation they studied: vets, slaughterhouse employees and people who worked with swine, horses, cattle and poultry.

There are also a number of straightforward precautions individuals can take to help protect themselves and their animals. MRSA lives on soft tissue — on people’s skin and in their noses — and can do so without causing harm when that tissue is intact. Reducing exposure of broken skin to the environment by keeping cuts and open wounds clean and covered can help reduce the risk of infection. Other simple steps, like regular hand-washing along with wearing gloves and protective clothing, can also stem the spread of livestock-acquired MRSA.

“Once the bacteria get a hold in an environment, they are really, really hard to get rid of,” said Wu. “Reducing the risk of antibiotic-resistant infections is one of the main goals that farmers have”