Home » Livestock not eating your food 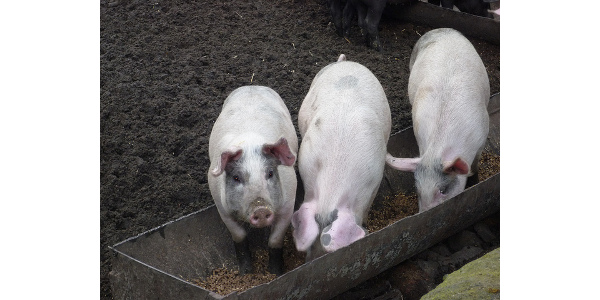 A new study in Global Food Security found that livestock place less burden on the human food supply than previously reported. Even stronger, certain production systems contribute directly to global food security because they produce more highly valuable nutrients for humans, such as proteins, than they consume. (Chris via Flickr)

PHILADELPHIA — Humans face mounting challenges when it comes to finding ways to sustainably feed an exploding population. As populations become wealthier and more urbanized, the demand for animal products continues to climb. Although supply chain efficiencies improve, livestock are considered a resource drain, requiring a large amount of feed, which could also be used by humans, to produce a relatively small amount of meat. A new study in Global Food Security found that livestock place less burden on the human food supply than previously reported. Even stronger, certain production systems contribute directly to global food security because they produce more highly valuable nutrients for humans, such as proteins, than they consume.

“As a Livestock Policy Officer working for the Food and Agriculture Organization of the United Nations, I have been asked many times by the press to report on the negative environmental impacts of livestock,” said lead investigator Anne Mottet, PhD. “Doing so, I came to realize that people are continually exposed to incorrect information that is repeated without being challenged, in particular about livestock feed. There is currently no official and complete international database on what livestock eat. This study contributes to filling this gap and to provide peer-reviewed evidence to better inform policy makers and the public.”

While there have been vast improvements in food systems, people still go hungry. In 2015 alone, approximately 800 million people around the world were undernourished. Animal food sources make a vital contribution to global nutrition and are an excellent source of macro- and micronutrients. Meat makes up 18 percent of global calories and 25 percent of global protein consumption and provides essential micro-nutrients, such as vitamin B12, iron and calcium. Livestock use large areas of pastures where nothing else could be produced. Animals also add to agricultural production through manure production and drought power. Further, tending livestock provides a secure source of income for people in many in rural areas.

Despite these benefits, raising livestock is often pointed to as an inefficient system because animals consume food that could potentially be eaten by people. Some previous studies, often cited, put the consumption of grain needed to raise 1 kg of beef between 6 kg and 20 kg. Contrary to these high estimates, the current investigation found that an average of only 3 kg of cereals are needed to produce 1 kg of meat. It also shows important differences between production systems and species. For example, because they rely on grazing and forages, cattle need only 0.6 kg of protein from human food to produce 1 kg of protein in milk and meat, which is of higher nutritional quality. In addition, this study determined that 86 percent of livestock feed, which includes residues and by-products, is not suitable for human consumption. If not consumed by livestock, the study points out, these “leftovers” could quickly become an environmental burden as the human population grows and consumes more and more processed food. Researchers also analyzed land use and herd management.

“The media often reports how consumers’ choices can contribute to sustainable development, like through a vegetarian diet; however, erroneous information is provided regarding livestock feed requirements,” said Dr. Mottet. “We hear statements, for example, that to produce 1 kg of beef, we need large amounts of cereals. While we need to ensure that our diets are sustainable from a health and environmental point of view, the public and decision makers need accurate information to guide their choices.”

Livestock production is growing fast because demand for animal products is rising, particularly in developing countries. FAO estimates that we need 70 percent more animal products by 2050 to feed the world. Therefore, the area of land needed to raise animals will also increase if feed conversion ratios are not further improved. Steps have already been taken through feed formulation, genetic selection, and better veterinary services to improve FCRs over the last 30 years, but continued progress is needed to make the system more sustainable. In addition, it is essential to improve the recycling of food wastes and by-products into livestock feed as well as to increase feed crops yields.

“Animal production, in its many forms, plays an integral role in the food system, making use of marginal lands, turning co-products into edible goods, contributing to crop productivity and turning edible crops into highly nutritious, protein-rich food. Quantifying the land and biomass resources engaged in livestock production and the food output they generate, but also improving our modelling capacity by including trends in consumer preferences, shifts in animal species, climate change impacts, and industrial processes to improve the human edibility of certain feed materials is arguably basic information needed as part of further research into the challenge of sustainably feeding 9.6 billion people by 2050,” said Dr. Mottet.