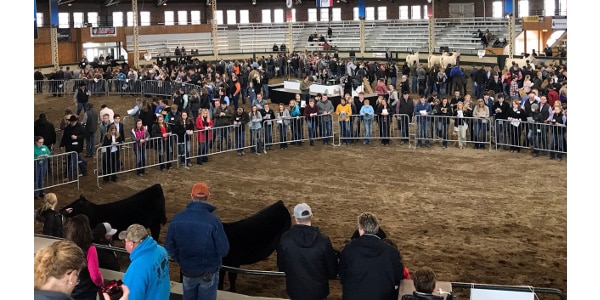 CURTIS, Neb. — Selecting the top breeding stock for a beef cattle herd means knowing what to look for in an animal.

That’s the goal in teaching students about livestock evaluation at the Nebraska College of Technical Agriculture in Curtis.

Breeding bulls and heifers scrutinized last Sunday at the Iowa Beef Expo in Des Moines were among an elite set of beef cattle, say two sophomores on the NCTA Livestock Judging Team.

Nebraskans Seth Racicky of Mason City and Camden Wilke of Columbus were among six Aggie students who compared traits in 10 classes of cattle, marked their judging cards 1-4 in placings, and later gave six sets of oral reasons to judges about those rankings.

“It was the best cattle we’ve seen all year, and the most elite cattle in certain classes,” said Racicky, whose specialty is dairy, and then beef cattle.

The sophomore animal science major was fourth in placings and 22nd overall individual at the contest.

Teammate Camden Wilke, also a sophomore in animal science, was eighth in placings and 25th overall.

Their favorite class to judge?

“The Maintainer heifers was the best class we saw,” Racicky said, quickly seconded by Wilke.

“It was a scenario (for reasons) where we had to pick a champion and reserve champion, and talk it like it was the champion drive of the breed show,” they explained of the four breeding heifers.

Age and size of the composite breed of yearlings varied as birthdates spanned January to April, 2019.

“They were elite cattle, brought to the Beef Expo by a family who raised them,” said Wilke, “Some of those were probably $20,000 heifers when they sold in the sale.”

Both students did well in placings while a teammate, Garrett Lapp of Adamsville, Ohio, proved the value of oral reasons.

Lapp was 12th in placings but “out-talked” Aggie teammates in reasons to gain an advantage and place 19th overall in the collegiate contest.

“Garrett caught up to us with his reason score,” Wilke said. “He’s really good at reasons.”

And for just cause.

In addition to evaluating live animals during judging workouts, the Aggies aggressively practice giving oral reasons each Tuesday and Thursday at 6:45 a.m.

Coach Doug Smith assigns reason classes from previous contests or workouts. Most students keep their note tablets handy from earlier competitions, or they rely on visuals in their head.

“I don’t take a lot of notes anymore but can see the classes from recall,” Racicky said.

Other teammates judging in Iowa were Maisie Kennicutt of Wallace, Matt Stichka of Mullen, and Emily Riley of Norton, Kansas.

When the Iowa contest was all said and done, the NCTA Aggie sophs were ninth high team overall, earning seventh in placings and 11th in reasons.

They’ll test their skills again this Saturday at the Nebraska Cattlemen’s Classic in Kearney, where they will be joined by their freshmen teammates.

Then, the next contest for the sophomore team will be March 11-18 at the Houston Livestock Show.

Both Racicky and Wilke plan to return to NCTA for a third year in 2020-2021 to add an agribusiness degree to their portfolio. They might also go on to UNL for a bachelor’s degree and future livestock judging.