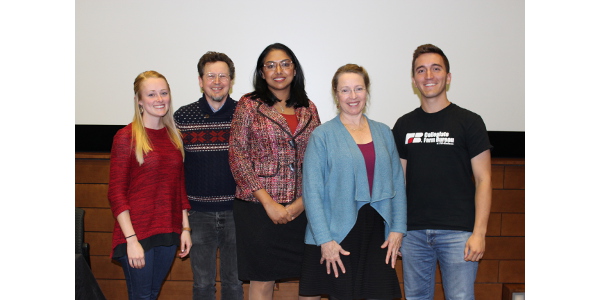 MADISON — Food Evolution is a movie set amidst a brutally polarized debate marked by fear, distrust, and confusion: the controversy surrounding GMOs and food. Traveling from the Hawaiian papaya groves to banana farms in Uganda to the cornfields of Iowa, Food Evolution wrestles with the emotions and the evidence driving one of the most heated arguments of our time.

This past Tuesday, October 24, the Collegiate Farm Bureau, UW-Madison Department of Plant Pathology, and the Food Research Institute brought Food Evolution to UW-Madison. Nearly 300 guests from as far away as Illinois and Iowa gathered in the Marquee Theater to watch one of the most talked about documentaries of 2017.

Following the movie, a panel of food and agriculture experts answered questions from the audience. Mariah Martin, a senior in Life Sciences Communication and member of CFB, moderated the panel. Questions ranged from GMO technology to science communication. Panelists included:

Caitilyn Allen is a professor of Plant Pathology at the UW-Madison, Michael Bell is a professor of Community and Environmental Sociology at UW-Madison and Director of the Center for Integrated Agricultural Systems, and Kavin Senapathy, a co-founder of March Against Myths and regular contributor to Forbes and Grounded Parents magazine.

“There’s so much more to think about than the movie has covered. The movie isn’t here to convince you one way or another, it’s the beginning of a dialogue and I hope that this is a start of that thinking process for all of you,” said Senapathy.

An attendee started off the panel by asking what non-scientists, or scientists in-training, could do to communicate science better. Michael Bell responded, “[Communicating science is] the importance of seeing knowledge as more than just facts, but also as a social relationship.”

One older member of the audience recounted coming home from serving in the Vietnam war with health complications from Agent Orange, and how he’s concerned that the herbicide, glyphosate, is the same. Agent Orange was a toxic chemical used in warfare developed by many companies that are now creating agricultural technologies.

Allen addressed the statement, mentioning that glyphosate can only disrupt pathways in plants, not humans or animals. “Say what you will about herbicides, you have to recognize that if people are no longer planting RoundUp ready [glyphosate] crops, then they’re going to be spraying more toxic herbicides,” said Allen

Senapthy talked about the distrust in corporations and why the continued debate benefits companies like Syngenta and Monsanto, “The cost and effort required for taking a specific trait from research to market is so very difficult, that right now all we have is commodity crops from these big companies that are created using genetic engineering. When we’re focusing so much on this debate, we’ve given Monsanto a free pass to control this technology.”

From the back of the theater, someone asked about the broader implications of GMOs beyond human health. What effect does this technology have on the environment, ecological diversity, or social inequality?

Allen responded, “What you said about corn is very valid for the developed world, but one gains another perspective when talking with subsistence farmers in the tropics. For them, food is not about production. It’s about getting from one day to the next.”

“I think we can both agree on one point,” Bell said, “The goal is not to feed the world, the goal is to have a world which is fed.”

Orb weaver spiders near your home