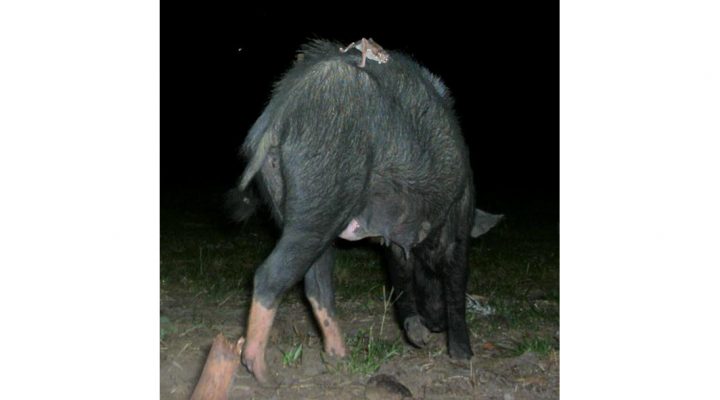 Vampire bats are now feeding on the blood of wild boars and feral pigs. (Alexine Keuroghlian)

SAO PAULO, Brazil — The number of vampire bats, which transmit rabies and are a concern for livestock breeders, may be increasing in Brazil and the Americas along with growth in the populations of invasive feral pigs and wild boars (Sus scrofa).

A group of researchers has recently reported an alarming rise in the numbers and distribution of S. scrofa, as well as showing that the common vampire batDesmodus rotundus is now feeding on the blood of these animals.

Results of this study have been published in the journal Frontiers in Ecology and the Environment by Mauro Galetti, a professor at São Paulo State University’s Bioscience Institute in Rio Claro, Brazil (IB-UNESP/RC), his PhD supervisee Felipe Pedrosa, Alexine Keuroghlian, a biologist with the Wildlife Conservation Society (WCS Brazil), and Ivan Sazima, a collaborating professor at the University of Campinas’s Zoology Museum (MZ-UNICAMP) in São Paulo State.

As numbers of invasive feral pigs increase, so does the damage to crops and native fauna, among other problems. S. scrofa is also a growing source of blood for vampire bats, so the population of D. rotundus is also likely to increase.

Only three of the approximately 1,200 known bat species feed exclusively on blood, and all three are found only in the Americas. D. rotundus is the most widely distributed, inhabiting a territory that ranges from Mexico to Argentina. This species feeds mostly on livestock and poultry, but it has also been documented to prey on mammals such as tapirs and deer.

In Brazil’s Atlantic Forest biome, about 1.4% of vampire bats are infected with rabies. The proportion may be as high as 10% in the Peruvian Amazon. Transmission of rabies by vampire bats is a major concern for ranchers in Brazil, even in areas where cattle are routinely vaccinated. Wild animals, including feral pigs, are not vaccinated and may therefore pose a serious threat by spreading this disease.

The researchers have used camera traps to monitor mammals in the Brazilian Pantanal and Atlantic Forest for the past 12 years. These are remotely activated infrared cameras that film at night when triggered by sensors that detect the presence of an animal.

“The rabies virus is transmitted through the saliva of infected bats. D. rotundus is a reservoir for other viruses with epidemiological potential, including hantavirus and coronavirus,” Sazima said.

“Vampire bats are fond of pigs’ blood, and switching from domestic to feral pigs must have been easy for such an adaptable animal.”

Feral pigs combine the ferocity of the wild boar with the size and fertility of the domestic pig, an animal selected to supply more meat and offspring than its wild ancestor. A male boar can weigh as much as 100 kg. Feral pigs often weigh over 150 kg and reproduce constantly.

Brazil faces an unprecedented invasion of feral pigs in rural areas, with an increase of 500% in these animal populations since 2007. In 1989, feral pigs from Uruguay began crossing the border with Rio Grande do Sul, Brazil’s southernmost state. This was the onset of the infestation in the South region.

“Major incentives were introduced in the Southeast region in the mid-1990s to encourage the production of boar meat,” Pedrosa recalled. “Producers imported sows and bred herds. But it proved not to be a very profitable line of business, and some producers gave up and released their boars into the wild.”

In an attempt to save their failing businesses, producers began crossing wild boars with domestic pigs, but they ended up also releasing the resulting crossbred pig-boars. As a result, the infestation previously confined to the South advanced through the Southeast to the Atlantic Forest region of São Paulo State. In the Pantanal, the invasion is older, dating from the colonial period, when free-range pigs raised by Portuguese settlers escaped and gave rise to the feral pig.

“Wild boars, crossbred pig-boars, and feral pigs all belong to the same species as the domestic pig, Sus scrofa. The wild boar’s original habitat was Eurasia, but it was introduced to Australia, South America, and the United States. Wild boars and other suids in a feral state are held to be among the worst exotic species in the world,” the researchers say.

The study concludes that the invasion of feral pigs in the Pantanal and Atlantic Forest areas is a serious threat and that “there is an urgent need to develop and implement effective control measures”.

Feral pigs are social animals that roam in groups. They are aggressive and highly dangerous. The problem is likely to spread. “Within a few years, they’ll be in the Amazon and Caatinga biomes. In the US and Europe, S. scrofa is the fastest-growing vertebrate species. Nearly 14,000 wild boars were killed in Germany near the Danish border in 2016 alone,” Galetti said.

The problem may not be limited to suids. “Other viral diseases carried by boars and feral pigs may be transmitted to native animals that are bitten by vampire bats, such as tapirs, deer, and capybaras,” Keuroghlian said.