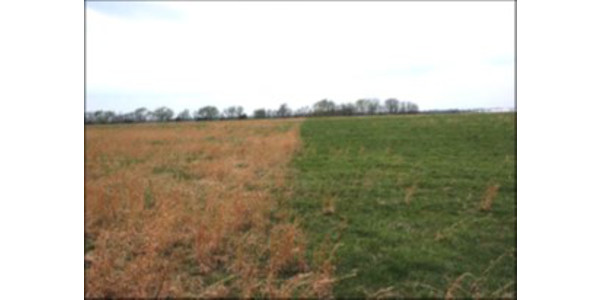 GALENA, Mo. — Broomsedge (or sagegrass) has been a steadily growing problem in southwest Missouri pastures for many years according to Tim Schnakenberg, agronomy field specialist with University of Missouri Extension.

“I receive calls on how to deal with the problem nearly every month, and it appears to be an ever-growing problem across our area,” said Schnakenberg.

Broomsedge is a native, perennial warm-season grass that is found throughout the Ozarks. Even though it is a native species, it has a reputation for low quality and having an invasive nature.

There is a common belief that broomsedge in a field means it needs lime. That belief was put to the test several years ago in a University of Missouri research project.

Several observations were found after three years of testing. But the biggest was that lime and phosphorus combined limited broomsedge increase to the greatest degree and produced the greatest increase in tall fescue.

It is clear from this study that both lime and phosphorus can be very useful in limiting broomsedge in fields. Both independently have an effect, but together, they can help in a fescue stand to compete with broomsedge according to Schnakenberg.

“I caution livestock producers to exercise patience in the process. It can take some time to make a dent in its population,” said Schnakenberg.

If the problem persists, a full renovation of the stand may be in order.

For more information, contact Tim Schnakenberg at the Stone County Extension Center in Galena, Mo. at 417-357-6812.