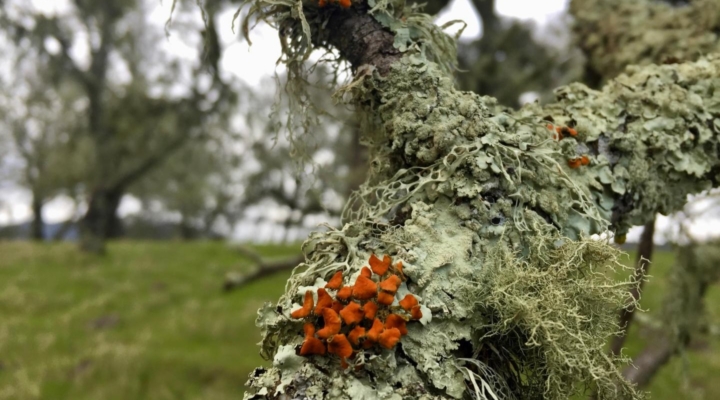 DAVIS, Calif. — As increasingly hot and severe wildfires scorch the West, some lichen communities integral to conifer forests aren’t returning, even years after the flames have been extinguished, according to a study from scientists at the University of California, Davis.

Lichen, an often overlooked organism that forms fuzzy, leaf-like layers over tree bark and rocks, is an unsung hero in forest ecosystems. It provides food for deer, caribou, and elk and is sometimes the only food source for flying squirrels, which are key prey for threatened spotted owls. Birds and insects use it to eat and nest. An important contributor to the nutrient cycle, it also helps fix nitrogen in forest soils.

“Lichen are beautiful, ecologically important, are all around us and tell us important things about the environment,” said lead author Jesse Miller, a postdoctoral scholar in the Department of Environmental Science and Policy at UC Davis. “But even if you don’t notice lichens, you would notice the consequences in ecosystems when they are lost.”

For the study, published August 9 in the journal Global Change Biology, researchers sampled lichen communities in about 100 study plots across California’s Sierra Nevada region. Five wildfires had burned, at varying levels of severity, in and around the plots between four and 16 years before the study’s sampling.

The results show that lichen communities were largely unaffected by low-severity fires. This suggests that prescribed fires and natural wildfires under moderate weather and fuels conditions are compatible with lichen diversity.

But areas that experienced higher severity wildfires had significantly lower abundance and diversity of lichen.

In severely burned areas where most of the trees died, nearly all the lichen were gone, even 16 years after the fire.

The lichens’ recovery is likely held back by the loss of tree canopy after the fire, the researchers said. The hot, dry microclimate left in the forest post-fire is not conducive to lichen growth. This indicates that lichen communities burned in Sierra Nevada forests likely won’t recolonize until mature trees regrow and the forest canopy is restored. This may exacerbate the effects of climate change that already threaten lichens.

“If the species could keep pace with the rate of climate change, the effects of fire might not be so bad,” Miller said. “But the concern is they might not. These fires happen so quickly and in such a large area, they could cause species ranges to contract faster than they are expanding.”

The study also indicates that the trend of increasingly dry forests and hotter, bigger and more severe wildfires could cause broad impacts to lichen diversity across the landscape, which could impact nutrient cycling and multiple food-chain interactions among wildlife.