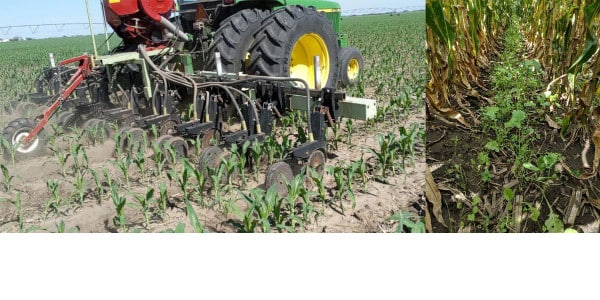 Figure 3. Jay Goertzen of Henderson evaluated interseeding cover crops into corn (left). He was surprised by the number of cover crop species that were established between the corn rows as seen in this image from September 6, 2019 (right). (Courtesy of UNL)

LINCOLN — Conducting on-farm research can help provide the reliable answers you need to make decisions for your operation with confidence. For three decades, Nebraska farmers have been working with university specialists and educators to design research projects to test products and practices on their farm. In 2019, over 100 Nebraska On-Farm Research Network projects were conducted. Each year, a wide variety of topics are researched. Three of the 2019 projects and their results are highlighted in this article. You can also hear from growers who conducted on-farm research in-person. Growers will be sharing about their on-farm research projects at the On-Farm Research Update meetings. These meetings offer a lot of interaction, dialogue, and an opportunity to learn from peers.

Russ Robertson and employee Dave Bassett farm corn and soybeans south of Lincoln. While they have farmed for many years, 2019 was their first year participating in the Nebraska On-Farm Research Network. Their research project looked at soybean seeding rates to determine the optimum seeding rate and how that rate might vary in different portions of the field, paving the way for future implementation of variable-rate soybean planting.

To implement the research study, Robertson and Bassett relied on the ag technology already on their farm. Variable-rate prescription maps for the study were developed to test four seeding rates in different locations in the field (Figure 1). The ability to use ag technology made the study quick to implement.

“We were able to do all our variable-rating with our soybean planter on the fly. We didn’t have to stop to change sprockets or gears. I was able to just go through and plant and combine the field and not have to use a weigh wagon – it worked really well,” Bassett said.

Robertson and Bassett worked with Joe Luck, a Nebraska Extension Precision Ag Specialist, to collect and analyze the data. Planting and yield data were post-processed to remove erroneous data points and then analyzed to determine the yield impact of the different seeding rates. A team of UNL personnel including Michaela Wetovick, Tyler Williams, Samantha Teten, and Tyler Smith collected in-season, georeferenced soybean emergence and post-harvest stalk counts, which contributed to the understanding of how plant population affected yield. The findings of the study revealed that net return was optimized at a plant population of approximately 72,000 plants/ac, which in their study, corresponded to seeding rates around 110,000 plants/ac. Spatial analysis of the data also revealed that soil type was an important factor in explaining yield variation in this field. Based on these findings, Bassett said they plan to lower their seeding rates in 2020.

“We learned we were seeding a little bit higher than we needed to be and that there would be an economic advantage to lowering our seeding rates.”

Bassett and Robertson plan to continue experimenting in upcoming years, saying “It is well worth the time it takes.”

Ron Makovicka of York is a long-time participant in the Nebraska On-Farm Research Network. This year, Makovicka and a neighbor, Jerry Stahr, both tested a nitrification inhibitor with their anhydrous ammonia applications. The two set up their research projects with the help of Jenny Rees, Nebraska Extension Educator.

“It was interesting to see how N-Serve® was working to tie up nitrogen,” Makovicka said.

Stahr is taking the study a step further in 2020, expanding the project to look at the impact of an inhibitor for both spring and fall applications of anhydrous. With the fall treatment strips already applied, he will rely on technologies such as a guidance system to be able to come back and fill in the strips testing the spring application. Stahr highlighted the value of collecting data over several years, noting he planned to continue the study for four or five years. While Makovicka won’t be continuing this study, he already has plans for other on-farm research projects in 2020.

Stahr emphasized the benefit of working together to do on-farm research.

“Anytime you can get information, it’s very valuable. You can always learn something,” Stahr said.

Jay Goertzen farms irrigated corn and soybeans near Henderson. For his first project with the Nebraska On-Farm Research Network, he chose to focus on interseeding cover crops into 36″ rows.

“I’ve been interested in trying to interseed cover crops for quite a while but never pulled the trigger,” Goertzen said.

He noted, “There’s good support provided to help set up a research plot, help you with the follow through, and collecting data in-season.”

The interseeded cover crops were compared to a no cover crop check.

Biomass samples were taken October 9, 2019 prior to harvest. The study found the diverse mix produced 97 lb/ac dry matter while the nitrogen mix produced 220 lb/ac dry matter. Goertzen said he was surprised how many of the cover crop species grew well between the corn rows.

“I tried a bunch of different varieties of seed and imagined maybe two or three would work, but out of the ten or twelve that I tried, I think only two or three didn’t work.”

Corn yield was the same for both cover crop species mixes and the no cover crop check.

“I’m going to implement interseeding on a lot more of my acres,” Goertzen said. “I’m also going to continue testing.”

Is On-Farm Research for You?

“It was an amazing experience,” Bassett said. “We would be happy to do another study.”

Goertzen agreed, expressing appreciation for the support that was provided and the opportunity to learn from the expertise of Nebraska Extension Educators.

There is still time for farmers to start on-farm research studies for the 2020 growing season. Extension Educators working with the Nebraska On-Farm Research Network can help you plan your study so you will have confidence in your results. They can also provide opportunities for additional data to be collected on your study, such as aerial imagery, photographs, soil samples, and other measurements.

Stahr emphasized that others should be doing on-farm research as well as there is always more to learn.

To learn more about the Nebraska On-Farm Research Network and how to participate, visit https://cropwatch.unl.edu/on-farm-research.

Asking “why?” with systems thinking

What is NCTA at Curtis?

Every farmer should be doing on-farm research
February 20, 2019