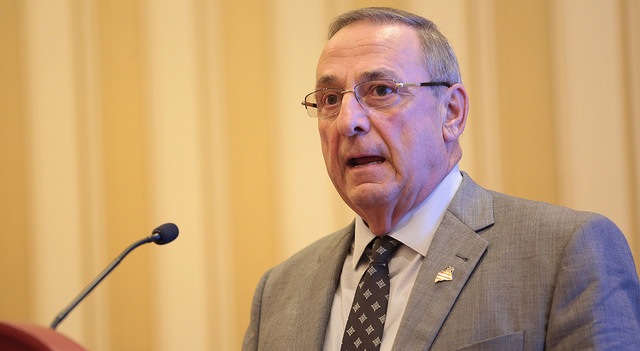 Decrying "outrageous accusations," LePage proclaimed that he had nothing to do with the diversion of lumber from state-owned land to a Canadian-owned mill in Stratton. The logs originally were supposed to go to Maine-owned mills. (Gage Skidmore, Flickr/Creative Commons)

AUGUSTA (AP) — An angry Maine Gov. Paul LePage on Tuesday ripped into a legislative committee over its inquiry into whether politics played a role in the transfer of logs from state-owned land.

The Republican governor chastised the Legislature’s Agriculture, Conservation and Forestry committee for the tone of a letter posing questions, including whether he was behind the diversion of timber that favored one mill over another last month.

Decrying “outrageous accusations,” LePage proclaimed that he had nothing to do with the diversion of lumber from state-owned land to a Canadian-owned mill in Stratton. The logs originally were supposed to go to Maine-owned mills.

“Folks, I had zero involvement. I have bigger fish to fry than to worry about what wood goes to any one mill. And I resent the fact that you’re sitting there, sir, with a smile on your face,” the governor fumed, looking directly at committee member Sen. Tom Saviello, a Republican from Wilton.

The committee’s questions about transfers of lumber to mills and the sale of lumber in Canada came against a backdrop of new tariffs imposed on Canadian softwood lumber.

The governor wants the U.S. Commerce Department to exempt eastern Canada from the tariffs, while the Maine operator of two sawmills supports the tariffs.

LePage insisted that the 400,000 board feet of wood was diverted to the Stratton mill because a fire in Canada left it perilously close to running out of wood.

He said there was no political retribution against a pair of mills operated by the Brochu family. “At no time was I diverting wood to hurt the Brochus. Never,” he said.

The governor acknowledged that lumber from state-owned land is sometimes sold in Canada, but he said that practice is not unusual. He said senior forestry officials told him that such Canadian sales have been happening since the 1980s.

He also said some lumber apparently was shipped to China, something that’s under investigation.

Part of LePage’s anger focused on protocol as well as the suggestion of wrongdoing.

LePage accused the committee of violating protocol by posing the questions to a state agency instead of directing the inquiry to his office. He said that delayed the questions from reaching him, and didn’t give him adequate time to answer the questions.

He also suggested that the matter should be referred to the Government Oversight Committee, so it can be referred to a watchdog agency, because he didn’t trust other committees.