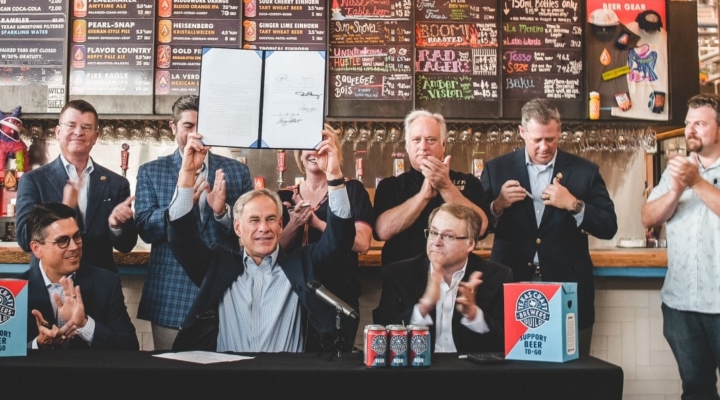 The Governor hosted the bill signing at Austin Beerworks and took part in a brewery tour following the signing ceremony. (The Office of Governor Greg Abbott)

AUSTIN — Governor Greg Abbott today signed into law House Bill 1545 (Paddie, Birdwell), which allows beer-to-go sales for craft breweries in the state of Texas. The bill also extends the operations of the Texas Alcoholic Beverage Commission and reduces burdensome regulations on the beer and wine industry. The Governor hosted the bill signing at Austin Beerworks and took part in a brewery tour following the signing ceremony.

The Governor was joined at the bill signing by Representatives Chris Paddie, Eddie Rodriguez, Senators Brian Birdwell, Kirk Watson, and Dawn Buckingham, and several stakeholders from the beer and wine industry.

“Today’s signing is a major win for the freedom and economic prosperity for which Texas has become known,” said Governor Abbott. “It is no secret that Lone Star State is one of the best states for business and entrepreneurship, and House Bill 1545 plays an important role in maintaining this by ensuring our beverage industry is free of stifling regulations. I am grateful to the legislators and stakeholders here today who played a vital role in getting this legislation to my desk.”

–The Office of Governor Greg Abbott

Five reasons to love California wine country this summer
May 20, 2021

How 'bout them cider apples: NY producers innovate for flavor
May 16, 2021