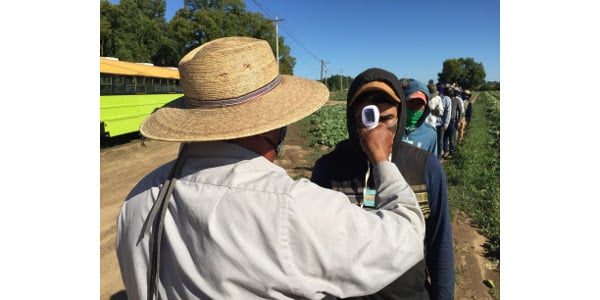 According to the complaint, farm employers and farmworkers have been employing COVID-19 prevention practices, both at work and outside of work, well before the MDHHS Emergency Order was put into place including wearing masks, social distancing, and utilizing disinfectants. (Farm News Media)

LANSING — An emergency order issued by the Michigan Department of Health and Human Services on Aug. 3 mandating COVID-19 testing by farm employers with 20 or more farmworkers is headed to court.

Grand Rapids-based Varnum LLP formally filed motions on Tuesday in Western District Federal Court on behalf of individuals affected by the testing mandate, including farmworkers and farm employers seeking an injunction to the MDHHS emergency order, which they argue is a violation of their civil rights.

Migrant Legal Aid, a nonprofit organization that has been advocating for migrant workers’ rights since 1973, and the Michigan Farm Bureau, the state’s largest general farm organization, both support the legal challenge of the emergency order as a violation of the Latino community’s civil rights.

According to Michigan Farm Bureau Assistant General Counsel Allison Eicher, there’s no question that the MDHHS emergency order is targeting a class of individuals who also happen to make up the largest class of farmworkers in the state, without regard to COVID-19 symptoms.

“The order clearly targets the Latino community, and the state has been really clear that they’ve singled out this minority class,” Eicher said. “No other group in the state is subject to mandatory testing for work except for nursing home workers.”

But even then, she said there’s a significant difference.

According to Eicher, producers and farmworkers have also questioned the unrealistic timetable for implementation, which required farm employers to develop a “Compliance Plan” by Aug. 10, with all mandated testing to be completed by Aug. 24.

In the effort to claim bragging rights as the “national leader” in COVID-19 protections of migrant and ag workers, Eicher said the MDHHS emergency order is ignoring two basic realities — farmer compliance efforts above and beyond previously issued executive orders, and that most farm operations have family members directly involved with migrant farmworkers daily.

“Farmers are doing their absolute best to manage their business through this crisis, while also placing the highest priority on the health and safety of their employees which typically includes members of their own family, taking extraordinary measures to insulate them from the risks of exposure to COVID-19,” Eicher said.

Even though the MDHHS order is an emergency order — issued by MDHHS Director Robert Gordon — not an executive order issued by Gov. Whitmer, Eicher said the MDHHS mandate relies on the authority of previously issued emergency orders.

“It’s a distinction without a difference,” Eicher added. “(MDHHS) cites a lot of the same authority as a public health emergency, but they rely on Gov. Whitmer’s executive orders to implement the emergency order’s testing mandate.”

Even though the MDHHS emergency order is now facing a legal challenge, the state does expect compliance with this order, according to Eicher, including the required Compliance Plan.