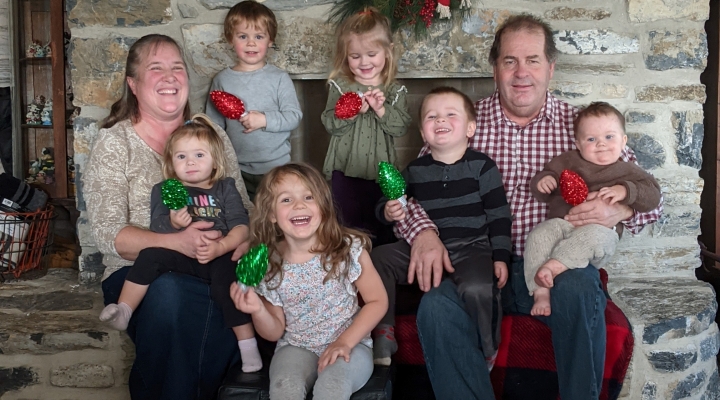 In the Center for Dairy Excellence’s latest episode of the “Cow-Side Conversations” podcast, John Kline (right) of Klinedale Farms in Lebanon County, Pennsylvania shared the steps his family has taken to create a successful transition plan for his five sons. As his children have each accepted responsibilities on the farm, including managing a satellite embryo business, Kline also discussed how he has gotten involved in the community. (photo by Center for Dairy Excellence)

HARRISBURG, Pa. — In the Center for Dairy Excellence’s latest episode of the “Cow-Side Conversations” podcast, John Kline of Klinedale Farms in Lebanon County, Pennsylvania shared the steps his family has taken to create a successful transition plan for his five sons. As his children have each accepted responsibilities on the farm, including managing a satellite embryo business, Kline also discussed how he has gotten involved in the community.

He opened the podcast by describing how each family member is involved in the dairy operation. Kline recently sold the satellite embryo business and 122 acres from his home farm to one of his sons. He continues to rent 100 acres from his brother while another son manages the crops for the remaining acres. They also have a 58-cow stall barn that they plan to lease to their other three sons. With each son involved in a different aspect of the operation, teaching them how to make decisions from an early age was important.

“We tried hard to allow them to make decisions at a fairly young age, even cattle purchase decisions. We went to some sales together that we intentionally let them make their own choices,” Kline said. “They weren’t always that great at the end of the day if you were looking at them as an investment, but to me, they were worth the purchase.”

As the Klines have worked through the transition planning process, the farm’s goals and priorities have shifted to match each of their son’s interests, including genetics and IVF work. When Trans Ova Genetics approached the family approximately five years ago about being a satellite location, it led to an exciting opportunity for them to focus on genetics. Now, their satellite embryo business is approaching 30 clients.

“[My son] Jason had already taken training to do embryo placement, so he was in a good position to place embryos into recipient animals. We decided to dedicate a portion of one of our buildings to put in a lab, a chute, and space to load and unload cattle,” Kline said in the podcast. “Every two weeks, Tran Ova sends a vet to extract the embryos here.”

Kline went on to describe the steps his family has taken to transition the farm from one generation to the next. After receiving a transition planning grant from the Center for Dairy Excellence, they had funds to cover the expenses for a consultant who helped guide the conversations between family members.

“The consultant gave us some professional advice, but also just kept us moving forward. It’s a lot easier to get up and do the work that needs to get done and not talk about the things you don’t have to do that day,” Kline shared. “But if you want to create a transition plan, you’re going to have to take time to sit down and talk about it. It wasn’t easy because all five of our sons had different interests in farming even though three of them have off-site incomes.”

“The challenge is, when you find out the costs that are incurred, you back away. We did that. When I turned 50 and we looked for a consultant, I thought we could never afford it. So we tabled it. But then we got nowhere, so we knew we had to come back to it,” he explained.

By working with the consultant, the Klines considered the structure of their family business, examined cash flow, and discussed how to divide responsibilities fairly between each son. They actually changed direction during the transition planning process after thinking through these components.

“We had worked most of our lives towards some sort of a joint venture or partnership, but it became obvious that it was way too complicated and difficult for cash flow. So we chose this avenue and we started parting some things out,” he said. “My son did successfully purchase the home farm this year, and now we have everything in place for what it looks like down the road as things hopefully happen in steps.”

When asked what he thinks drives success with transition planning, Kline shared that it requires a willingness to let the next generation make decisions and take on new responsibilities.

“I try to keep the boys engaged and allow them to make decisions. A number of years ago, I was at a meeting where they were challenging us to work on transitions. I’ll never forget, someone stood up who I believe was 60 years old, and said ‘Well, Dad still has the checkbook.’ I thought, that won’t work for me,” he shared in the podcast. “That really motivated me to stay in this conversation on what happens down the road and keep passing off the baton to the next generation – allowing them to take things and run with it.”

Transitioning the farm responsibilities has not only helped his sons take ownership of certain aspects of the dairy operation, but it has also given Kline time to get involved in the community through OnFire Youth Ministry. With a learning center for kids who are struggling academically, spiritually, and socially, as well as a teen center, Kline helps youth find their purpose in a supportive environment.

“I was challenged to do something with my life besides business. It’s all about establishing relationships with kids and giving them activities that bring value and opportunities to show them they have a purpose,” he said. “I think I always had an entrepreneurial mindset in business, and it seemed like God took that same mindset and stirred it toward youth ministry.”

Being able to successfully transition his dairy operation to the next generation has helped Kline embrace his leadership role in the community.

“I needed to pass things off. I still want to help my sons, but in order to be effective in the ministry, I needed to get things off my plate,” he explained. “I have a great wife, and I couldn’t have done it without her. My sons have really developed to be a dream team. We’re thankful as we expect our eighth grandchild. It has been very rewarding.”

To listen to the full podcast interview, visit www.centerfordairyexcellence.org/podcast. The podcast is also available on Spotify, Apple Podcasts, and Amazon Music. With a new episode released each month, Kline’s interview is the 13th episode and marks the start of the second season. The podcast was designed to share real-time farmer insight, tricks of the trade, and inspiring stories from dairies across Pennsylvania.

Under the Ground enhances food and beverage community through education and connection
December 2, 2021