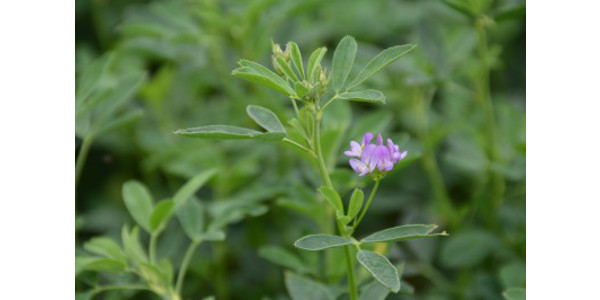 While Purdue Extension is not aware of any new or exotic crop diseases or pests so far this year, there have already been reports of fairly large numbers of potato leafhopper in alfalfa.  Leafhopper are an insect that cannot winter over in Indiana, and they rely on southern breezes to deliver them to northern climates. (Mark Sulc, Ohio State University)

GOSHEN, Ind. — Every few years, the remnants of a tropical storm or hurricane make its way to the eastern Corn Brelt, bringing with it rain, wind and sometimes a few other surprises. In 2004, that surprise was soybean rust. You never know if some new disease or insect will find its way to the Midwest on the strength of those winds.

Last week, Cristobal spun its way north past Lake Superior, the first storm on record to go that far north. It is always wise to keep an eye on your crops after such an event. While we are not aware of anything new or exotic, there have already been reports of fairly large numbers of potato leafhopper in alfalfa.  Leafhopper are an insect that cannot winter over in Indiana, and they rely on southern breezes to deliver them to northern climates. Thank you, Cristobal!

It is not unusual to see leafhopper on second cutting alfalfa, but it is a little early for the high numbers we are seeing.  Most alfalfa fields were cut 7-10 days ago.  That tender alfalfa regrowth is more susceptible to damage at lower leafhopper numbers.

There are numerous products labeled for leafhoppers on alfalfa.  You can see Purdue’s recommendations at https://extension.entm.purdue.edu/publications/E-220.pdf   Be sure to pay close attention to the harvest restriction on the product.

If you will be planting alfalfa this fall, consider a variety that is leafhopper resistant.  Varieties have improved dramatically since the first leafhopper resistant hybrids were released years ago.  They are much more palatable than in the past, with the added benefit of little or no insecticides needed for leafhopper!

Finally, do not assume that yellowing of alfalfa leaves is leafhopper injury.  Some conditions, such as boron deficiency or cool, wet weather can encourage look alike symptoms. Many soils in our region are naturally short of boron.   It can be easily remedied with supplemental boron when fertilizer is spread over the field.

IN corn's tar spot epidemic could cause losses
September 21, 2021