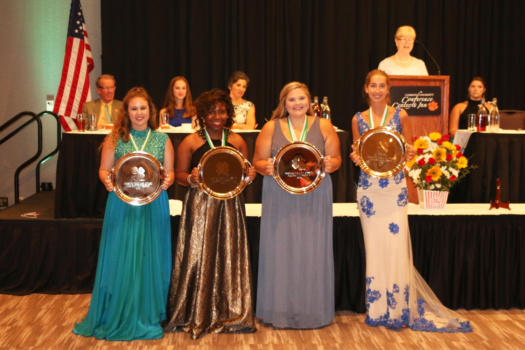 It came in middle school when a friend extended an out-of-the-blue invitation to participate in dairy judging.

Scott’s family had kept cows for as long as she could remember. “‘Who knows? I could be good at (dairy judging),’” she recalled thinking.

On the way to practice for the event that afternoon, Scott was informed by her friend that they didn’t have much time to prepare: The state competition was the very next day in Clemson.

But while it came abruptly, Scott not only found early success — starting with a third-place finish in the state in that first event — but also long-term gratification competing both as an individual and as part of a team on the state and national levels.

Looking back, the Saluda County resident says the chance encounter profoundly changed the course of her future.

“(Cattle) quickly became a hobby that brought so many lessons and relationships that I loved,” she said. “I often think back to the day when I was standing outside of school waiting for my ride, and I was simply talking to a friend — and I started one of the most amazing journeys.

“It amazes me to think that if I had not been standing outside of school that day, I would not be standing in front of you all today.”

And on July 13, now a graduate of Gilbert High School and set to enroll at Clemson University in the fall, Scott stood in front of more than 200 young people, family members, Clemson Extension agents and volunteers gathered for State 4-H Congress not just for the presidential address, but also later in the evening as one of four winners of the organization’s top prize, the 4-H Presidential Tray.

The event was the culmination of Scott’s 4-H journey.

“The South Carolina 4-H Presidential Tray is the highest honor that a 4-H’er can achieve,” said Pam Ardern, State 4-H program leader. “It is the result of many years of dedication and hard work.”

The 4-H Presidential Tray is a $2,000 educational scholarship designed to recognize the top four Senior 4-H members who are National 4-H Congress and/or National 4-H Conference alumni and have outstanding accomplishments in 4-H leadership, citizenship and project work.

Nakel Pinckney of Jasper County garnered the Spirit of 4-H Award, which recognizes outstanding spirit in the 4-H program and is given to an individual who exemplifies the four Hs: head, heart, health and hands.

The cousin of the late Clementa Pinckney, Nakel knew little about 4-H until the former state senator was among nine people killed in a 2015 shooting at the Charleston church that he pastored. A 4-H alumnus himself, the Rev. Pinckney is the namesake of the 4-H Clementa Pinckney Leadership Conference, held annually on Clemson University’s campus.

“(Nakel) made plans to meet him, but unfortunately never was able to,” said Katie Shaw, S.C. 4-H youth development specialist. “But his life, like Sen. Pinckney, changed when he became a 4-H member. He participated in our first 4-H Pinckney Leadership program held in 2016. He had a great time, and he also became close to a person he would never meet. Ever since, his 4-H career has taken off. He became a real role model. He has become a true leader.”

Ian Adams of Charleston County, Morgan Marlett of Greenville County, Allie Trotter of Saluda County and Garrett Ulmer of Colleton County were recognized as National 4-H Conference winners, awarded to four senior 4-H members with outstanding achievement in leadership and citizenship, and will attend the National 4-H Conference next spring in Washington, D.C.

The Glen Krohn Award, which recognizes outstanding volunteer leadership in the 4-H program, was presented to Lori Thomas of Dorchester County, Vivian Johnson of Sumter County and Stuart Rochon of Chester County.

The awards were presented at a banquet that served as the culmination of State 4-H Congress, which ran from July 11-14 at Clemson and was highlighted by activities, assemblies, day trips, workshops and more.

“This event has truly helped us grow as individuals, leaders and as a state organization,” Scott said. “All of our workshops and projects have been based on this year’s theme of ‘Under the Big Top.’ On the first day of Congress, I told everyone that life is a circus. So, you have to sit back and enjoy the show because some days you’re the ringleader and some days you’re the clown.

“I believe that this week we have been able to clown around while also being able to sit back and reflect on service that we have done.”

The keynote speaker for the 4-H State Congress banquet was Sally McKay, director of communications for the S.C. Department of Agriculture, who spoke to the youth not only of the importance of the four Hs, but also what she called the four Cs: curiosity, compassion, confidence and community.

“There’s magic in a community like this,” she said. “That’s something that I still get excited about when I come and see young people. I don’t know how many times you’ve been told that you are the future leaders … and you will be. But you are the current leaders. You are being that, and you are becoming that. Being and becoming, all at the same time — what a wonderful thing.”