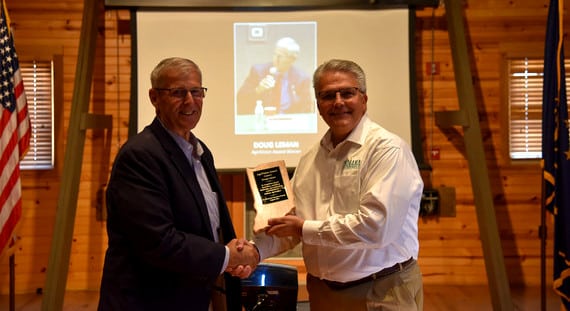 INDIANAPOLIS — Lt. Gov. Suzanne Crouch, Indiana’s Secretary of Agriculture, and the Indiana State Department of Agriculture have announced Doug Leman and Dr. Robert Waltz as recipients of the 2021 AgriVision Award.

“The State of Indiana and our agribusinesses are better because of the devoted leadership of Doug Leman and Dr. Robert Waltz. Both visionaries have completed incredible things and through their careers they both lead many projects that will serve Hoosiers and Indiana well for years to come,” Crouch said. “Both individuals have legacies filled with service, thoughtfulness and collaboration. We thank them for their service to Indiana and our constituents and congratulate them on being awarded the state’s highest agricultural honor.”

Doug Leman was selected as a 2021 AgriVision award winner. Leman previously served as executive director of the Indiana Dairy Producers, a membership organization that advocates on behalf of dairy farmers and promotes the dairy industry in Indiana.

Being a former dairy farmer himself, Leman was passionate about assisting dairy producers, processing companies and other businesses that impact dairy farmers. He truly defines servant leadership while empowering future generations of dairy leaders. No matter the dairy outreach initiative, Leman was always present and ready to advocate for dairy producers.

The Indiana State Department of Agriculture saw a need for a dairy strategy to attract dairy processors and businesses and bolster our dairy economy, so in 2015 the agency created the Indiana Dairy Strategy. The agency then re-worked the dairy strategy and gathered new data in 2019 to create the Indiana Dairy Strategy 2.0. Both of these strategies were instrumental in attracting new dairy businesses and keeping fluid milk inside Indiana’s borders for processing, therefore creating a stronger economic impact. Both strategies would not have been as effective or well received without the leadership and assistance from Leman. He was an outstanding partner on all agency dairy projects and always willing to share his knowledge for the betterment of the industry.

Leman’s contagious spirit empowered others in the industry to advocate for the dairy industry, pulling together a strong group of companies, farmers and organizations to elevate dairy farming at a local, state and national level. He recently retired from the Indiana Dairy Producers after serving them and their membership for over 10 years. The Indiana Dairy Producers would not be the strong organization it is today without the leadership of Doug Leman.

Dr. Robert Waltz also received the AgriVision Award. Dr. Waltz recently retired after 14 years as State Chemist and Seed Commissioner with the Office of the Indiana State Chemist. Dr. Waltz earned his bachelor’s degree and PhD from Purdue University. In addition to his career as Seed Commissioner, he also was a research professor in Purdue’s Department of Biochemistry.

Over the course of Waltz’s last 14 years as Seed Commissioner he spearheaded multiple events and projects that benefited many agricultural industries as well as everyday constituents alike. He partnered with industry organizations and Purdue Extension to offer numerous workshops and meetings each year to highlight the regulations and regulatory programs Office of the Indiana State Chemist oversees.

Dr. Waltz played a key role in the implementation of the Food and Drug Administration’s (FDA) Food Safety Modernization Act (FSMA) rules for the State’s animal feed and pet food industries. He was influential in the creation of FieldWatch, a communication tool for specialty crop growers and pesticide applicators. Dr. Waltz was also instrumental in the creation and launch of Indiana’s pilot and commercial hemp production program.

In addition to his work and career’s he also sat on several boards. Dr. Waltz is a fellow and past president of the Indiana Academy of Science and he was the chair of the Indiana Hemp Advisory Council. At the national level, Dr. Waltz served as president of the Association of American Food Control Officials and was on the governing Council of the Food and Drug Administration’s Partnership for Food Protection.

Throughout his career, Dr. Waltz was known as a forward thinker, regularly anticipating future needs of the State and the industries which Office of the Indiana State Chemist serves. Dr. Waltz once noted that his role with Purdue University as a professor and his career with the State of Indiana was the embodiment of the three pillars of the land grant institution – research, education and outreach.

“These two outstanding agricultural leaders have been pillars in their respective industries throughout their careers,” said Bruce Kettler, director of the Indiana State Department of Agriculture. “They both have contributed so much time, effort, and knowledge to their peers. I wish them well on their retirement and thank them for their service to the citizens of Indiana.”