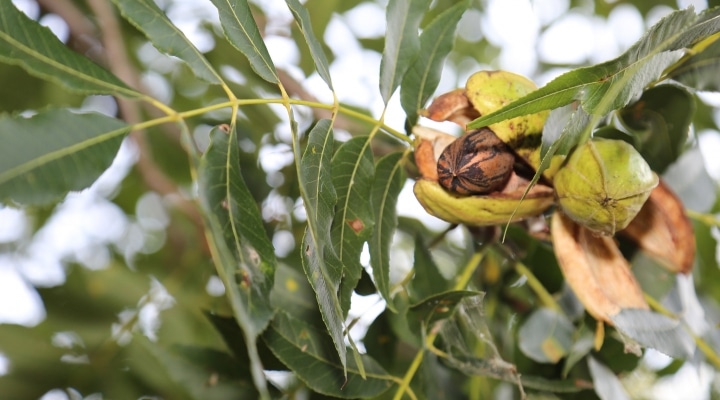 The Ellis Family has long marketed their farm store outside Vienna with the catchy slogan, “We’re Nuts,” making the site of the signing ceremony appropriate since one of the bills –   Senate Bill (SB) 222 makes the pecan Georgia’s official state nut.

“Businesses like the Ellis brothers are the heart of what this legislation designating the pecan as Georgia’s official nut is about,” Gov. Kemp said. “Make no mistake, the backbone of Georgia’s economy is places just like this owned by hardworking Georgia families. I’m excited to be in South Georgia and talking about the No. 1 industry in the state.”

Kemp told media that designating pecans as Georgia’s state nut would provide the crop and its growers with new marketing opportunities.

Georgia Commissioner of Agriculture Gary Black assured signing ceremony attendees that Georgia’s peanut crop was not being slighted by establishing the pecan as the state nut since peanuts are a legume and have previously been designated Georgia’s official state crop.

House Bill (HB) 693 gives the right-of-way to farm equipment when drivers are following state rules for farm equipment on Georgia roads, specifically when bridges, guardrails or other physical impediments would not safely allow a tractor or other farm equipment to travel on the far right-hand side of the road.

HB 693 also prevents farm tractors from traveling on U.S. interstates unless the Department of Public Safety has permitted such travel in certain geographic areas of Georgia as deemed necessary.

If you’d like to celebrate the pecan becoming Georgia’s official state nut, there are lots of pecan farms you can visit. Located about four miles off of I-75, the Ellis Brothers Pecan market is one of about 80 family farms and markets featured in Georgia Farm Bureau’s Farm Passport Program. Other Georgia pecan growers participating in the Farm Passport Program include: Berry Good Farms, Dickey Farms, Franklin Citrus Farm, Greenway Farms, Lane Southern Orchards, Little Duck Farms, Pearson Farm, Merritt Pecan Co. & General Store, and William L. Brown Farm Market.  To learn more about the Farm Passport Program visit www.gfb.ag/farmpassport.  The program offers consumers a chance to discover Georgia agriculture while traveling the state with friends or family.  Passport holders can earn prizes based on the number of farms they visit.

Commissioner Black also acknowledged how nice it was for a large group of Georgia’s ag community to gather for the first time in a year and noted that he’d recently received his second COVID-19 vaccine.

“I got my second shot yesterday. If you haven’t gotten your vaccine, I hope you’ll do that soon,” Black said.

Brood X cicadas may be gone, but the evidence of their passing remains
July 25, 2021