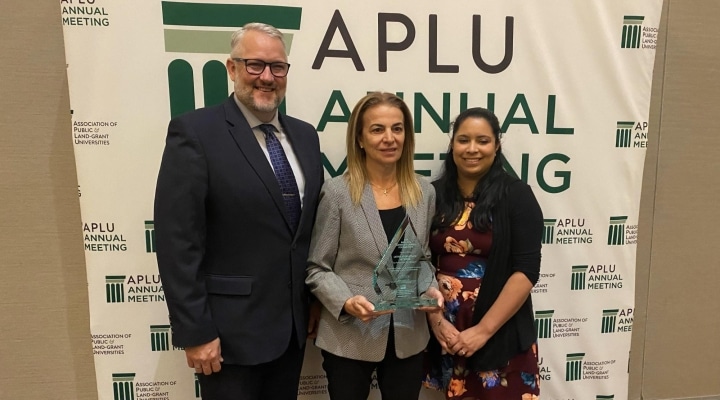 Latinx Agricultural Network in Penn State’s College of Agricultural Sciences was the recipient of the 2022 National Extension Award for Diversity, co-sponsored by the Association of Public and Land-grant Universities' Extension Committee on Organization and Policy in partnership with the U.S. Department of Agriculture’s National Institute of Food and Agriculture. From left are, Brent Hales, director of Penn State Extension and associate dean in the college, Maria Gorgo-Gourovitch, horticulture extension educator, and Emma Rosenthal, doctoral candidate in plant pathology (photo by Penn State University)

UNIVERSITY PARK, Pa. — The Latinx Agricultural Network in Penn State’s College of Agricultural Sciences has been lauded nationally for enhancing engagement with and support for Pennsylvania’s Latino agricultural community.

The group was the recipient of the 2022 National Extension Award for Diversity, co-sponsored by the Association of Public and Land-grant Universities’ Extension Committee on Organization and Policy in partnership with the U.S. Department of Agriculture’s National Institute of Food and Agriculture. The award was presented during the association’s annual meeting Nov. 6 in Denver, Colorado.

The award acknowledges the accomplishments of cooperative extension professionals in achieving organizational changes that support diversity, pluralism and innovation in programs that impact extension audiences.

The Latinx Agricultural Network stands out from other initiatives as a coordinated effort with members from all areas of extension, support from faculty from different academic departments, significant graduate student involvement, and commitments for continued support from college administration, noted Brent Hales, director of Penn State Extension and associate dean in the college.

“No other land-grant institution in the mid-Atlantic region has a similar initiative to serve Latino communities,” he said. “This award is well-deserved, and we commend the team for its work in ensuring that Latino audiences receive the best extension programming that Penn State has to offer and that the needs of these communities are met using culturally relevant methods.”

According to Maria Gorgo-Gourovitch, horticulture extension educator and Latinx Agricultural Network leader, Latinos make up 75% of the agricultural workforce in the U.S.; in the mushroom industry, it is up to 90%. Additionally, the number of Latinos residing in rural communities in Pennsylvania doubled during 2000-2010, while the number of urban Latinos increased by 80%.

She also pointed out that there is a growing trend of Latinos moving from being employees to becoming managers/owners of agricultural enterprises, increasing their influence on agricultural policy.

“The number of Hispanic principal operators in the country now stands at 112,451, a 24% increase from 2012,” Gorgo-Gourovitch said. “There are now 759 Hispanic operators in Pennsylvania, up from 652 in 2012. These operators and their families make essential contributions to the well-being of Pennsylvanians through their work, and we must support their needs.”

The Latinx Agricultural Network was founded in 2019 by graduate students Ilse Huerta and Emma Rosenthal. The group has grown from a nine-member board to a 110-member working team of faculty, extension educators and graduate students. The team is led by Gorgo-Gourovitch, Adrian Barragan, assistant research professor of veterinary science, and Jaime Garcia Prudencio, assistant teaching professor, Spanish for Agriculture program.

“Before the development of the group, activities supporting Latinx communities in Pennsylvania were based on ad hoc efforts of a handful of dedicated educators who sought federal funding for their programs,” said Carolee Bull, professor and head of the Department of Plant Pathology and Environmental Microbiology, who supported the group’s formation. “As a result, programming did not span the entire extension portfolio, leaving a knowledge gap for a critical agricultural community.”

The group’s leadership team worked for two years to gather background information on the programming available in Pennsylvania. The groundwork for current efforts to reach Latino stakeholders began with needs assessments, research on best extension practices and educator training.

Using that knowledge, the team translated more than 1,000 educational resources and training opportunities — fact sheets, videos, articles, webinars, publications, short courses and workshops — into Spanish for Latino communities. Most, if not all, also have been promoted and shared with Latino stakeholders through the Agricultura en Español Facebook page.

Other examples include presenting in Spanish at the annual Mid-Atlantic Fruit and Vegetable Convention; trainings on topics such as tractor safety, electrical hazards and pruning; mushroom industry short courses; research on Hispanic farmers in Pennsylvania; and a workshop series titled, “Bringing More Hispanic Farmers/Farmworkers to Extension Programming.”

The team plans to build on its early successes by bringing more extension educators and faculty together to ensure that education and outreach programs for Latino communities are comprehensive and based on best practices.

“Extension educators now have a support network of faculty, students, administrators and Latinx community leaders who provide input on innovative educational formats for sharing timely, science-based information to enhance the lives of Latinx farmers, farm workers, and other residents of Pennsylvania and beyond,” Gorgo-Gourovitch said. “We are incredibly proud of the work that has been done and excited about the future.”

More information can be found online at https://agsci.psu.edu/diversity/latinx-agricultural-network. 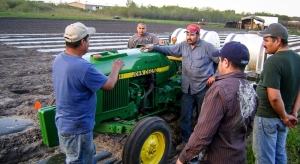 COLLEGE STATION, Texas — The Texas A&M AgriLife Extension Service has received a grant to lead a project in partnership with the Southern Risk Management Education Center, SRMEC, to develop and deliver business and asset protection educational information to Hispanic farmers and ranchers. The project, implemented in conjunction with the Farm Tax and Asset Protection Program, FTAP, will […] 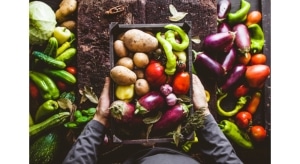 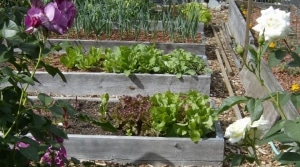 UNIVERSITY PARK, Pa. — Penn State Extension Master Gardeners expected there would be a renewed interest in home gardening in 2020 due to the COVID-19 pandemic. As a result, they developed the 10-part “Victory Garden Reinvented!” webinar series to support gardeners across the country. In 2021, the Master Gardener program and the Penn State Extension horticulture team expanded this effort […] 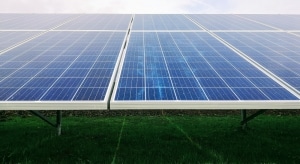 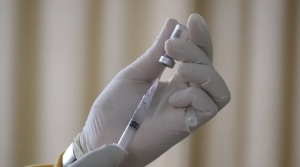 UNIVERSITY PARK, Pa. — Addressing COVID-19 vaccine hesitancy in Pennsylvania, with a particular focus on the Latino population and senior citizens aged 65 and older in rural communities, is the objective of a project spearheaded by Penn State Extension. The Extension Collaborative on Immunization Teaching and Engagement — EXCITE, for short — is a joint effort […]