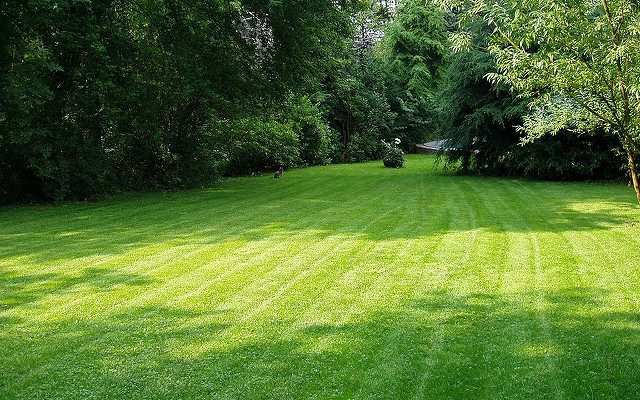 Mow at 3.5 inches in height. The taller grass height produces more sugars, to the benefit of the plant. It also shades the soil, making the roots cooler and it crowds out competitive weed species. (heipei via Flickr)

GOSHEN, Ind. — Lawns in the area took a beating this season in Elkhart County. May was a cool and wet month. June was either hot or cool, but always wet. July was dry enough that most of the unirrigated turf in the area went dormant. Some heavy rain during the fair helped to wake most bluegrass from its dormancy, but other grassy weeds like crabgrass and fescue continued to grow during the dry spell and many yards now have an unkempt look to them now.

Late summer and fall is the best time to improve a lawn. Fertilizing in early September gives a big benefit to cool season grasses like bluegrass. Specifically, slightly thin lawns will begin to fill in, density of the turf will improve, and roots will store more carbohydrates away to help improve winter survival.

Fertilizer used in the fall is typically close to a 4-1-2 or 4-0-2 ratio between nitrogen, phosphorus, and potassium. Examples of this might be a 24-5-10 or a 30-0-12. It is good if you can find a fertilizer with some slow release nitrogen. Slow release nitrogen is often called “water insoluble” nitrogen on the fine print of the labels. Sources of slow release nitrogen are often listed on the bag as sulfur- and/or polymer-coated urea, methylene ureas, isobutylidene diurea (IBDU) and natural organics (manure-based products).

Proper mowing height is important too. Never mow bluegrass less than 3 inches in height. Better yet, mow at 3.5 inches in height. The taller grass height produces more sugars, to the benefit of the plant. It also shades the soil, making the roots cooler and it crowds out competitive weed species.

Watering is also important. Most years, rains begin to occur in mid-August and September to restore the turf. Turf needs about 1.5 to 2 inches of rain or irrigation a week to thrive. The water should be applied infrequently and deeply, not in small daily doses. This will encourage deep, healthy root systems.

Grassy weeds are very visible right now, after being encouraged by the spring rains and made more obvious by the dormant bluegrass. Unfortunately, it is nearly impossible to wipe out grassy weeds in lawns with herbicides in August or September because the grassy weeds, after all, are very closely related to bluegrass. Anything that kills the grassy weeds is likely to injury or kill the bluegrass too. The annual grasses (those that sprouted in this season), like crabgrass, will be killed by the frost in October. The perennial grassy weeds, like quackgrass or tall fescue, can be spot treated with glyphosate, but the spots will need to be reseeded, and there is no guarantee the weeds will not sprout back up in those spots.

Broadleaf weeds like dandelions and plantain are best controlled from late September through October, as they begin to pack away food for the winter. Three way mixtures of 2,4-D, mecoprep and dicamba work well on most broadleaf weeds. Harder to control broadleaf weeds such as violets and creeping Charlie might require some triclopyr or fluroxypyr.

Fall is also the best time to seed a lawn. In our region, grass seed is best sown August 15-September 1. Till the area, regrade it, firm it up and then spread the best quality grass seed you can afford in the area, then rake it in lightly. Newly seeded grass needs to be watered several times a day for almost 2 months.

A mistake I commonly see when lawns are seeded is that people stop watering soon after the first batch of “peach fuzz” grass sprouts (about a week after seeding). What they do not understand is, the first grass that sprouts is typically annual ryegrass, known to come up and make people happy that something is growing where they spread the seed. The problem is, annual ryegrass is going to die during the first frost. Bluegrass takes a full 30 days just to sprout, and needs to grow for at least 45 to 60 days to be able to survive the winter. If you stop watering at the first sign of green, you will lose your bluegrass most likely and you will be unhappy with the results next spring.