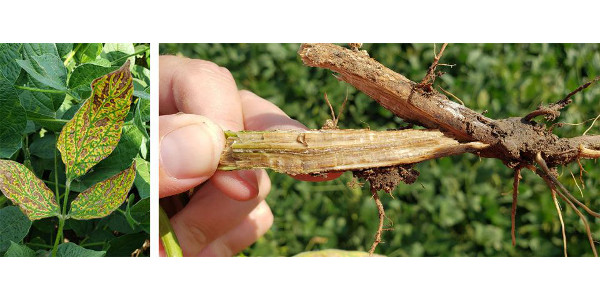 LINCOLN — Record rainfall during August and continued wet conditions into September are much to blame for the flush of diseases Nebraska’s soybean crop has been experiencing. The following describes some of the more common diseases diagnosed by the UNL Plant and Pest Diagnostic Clinic in samples from across Nebraska.

Sudden death syndrome (SDS), caused by the fungus Fusarium virguliforme, develops during cool, wet growing seasons. The fungus may infect roots early in the growing season, but foliar symptoms develop during R3 or later. Heavy rains during flowering promote foliar symptom development, as well as the presence of soybean cyst nematode. Symptoms include interveinal yellowing and necrosis on leaves that quickly turns brown (Figure 1). Leaves may defoliate within several days after symptom development. Foliar symptoms are accompanied by severe root rot (Figure 2). The inside of lower stems may be discolored, while the central pith remains white. Sometimes cobalt blue fungal growth may be visible on symptomatic roots.

SDS-resistant soybean varieties may reduce foliar symptoms by up to 80% and should be utilized as the best management practice for SDS. Some seed treatment fungicides may be effective, as well, especially when used in combination with resistant varieties. Management of soybean cyst nematode is also recommended because the nematode can cause SDS to develop earlier and become more severe in fields where both are present. Crop rotation with corn is not effective for management because the fungus can survive on corn kernels and other debris.

Frogeye leaf spot is caused by the fungus Cercospora sojina. The fungus survives in infested crop debris and seed. Symptoms are small, irregular gray to brown lesions with dark borders (Figure 3). Disease is favored by warm temperatures and high relative humidity. In fields where there is a history of severe frogeye leaf spot disease, disease-resistant soybean varieties should be used and, when possible, the field should be rotated to a non-host crop.

Foliar fungicides can be very effective at managing the disease, especially when applied at R3-R5. However, resistance to the QoI fungicides (formerly called strobilurins) is becoming increasingly common in other states, including South Dakota and Iowa. If you have observed reduced control of frogeye leaf spot after a foliar fungicide application, please notify us in Nebraska Extension. Products containing active ingredients from multiple classes may be necessary to achieve adequate control. Product combinations with up to three modes of action are currently available.

Brown stem rot, caused by the fungus Phialophora gregata, infects roots and lower stems. The pathogen affects water and nutrient movement in the plant. Like SDS, infection may occur early, but leaf symptoms don’t develop until the reproductive stages. Plants may develop brown stems toward the base and lodge. Leaf symptoms may include interveinal chlorosis similar to SDS. One diagnostic feature of this disease is brown discoloration with stacked “disk-like” tissue in the center (pith) of split stems (Figure 4). Wet soils early in the season and moisture stress later support disease development. Planting resistant soybean varieties and crop rotation are important for management of brown stem rot.

White mold is caused by the fungus Sclerotinia sclerotiorum. The disease is common in many areas of the state and is supported by frequent moisture and cooler temperatures. Initial infection is through senescing flower petals. Narrow row spacing, which supports early canopy closure and higher relative humidity in the canopy, supports disease development. Dead plants may appear singly or in patches in the field with white fungal growth evident in and on the stems (Figure 5). Infected stems may become bleached and stringy. Stems and seed pods may also contain hard, black fungal structures (sclerotia) that resemble rat droppings. Sclerotia fall to the ground during harvest and survive for years until field conditions are favorable for sporulation and infection of susceptible crops again.

Grass crops, like corn, grain sorghum, and small grains, do not develop white mold; however, crop rotation is not helpful for reducing disease because of the longevity of the fungus in sclerotia. Fungicides can effectively control the disease when applied during flowering in fields with a history of white mold and favorable conditions. Fungicides are most effective when applied at flowering and are less effective when applied once symptoms are visible on the plant. Planting in 30-inch rows (instead of narrow drilled rows) helps to promote air movement in the canopy and a reduction in relative humidity.

Bacterial blight is caused by Pseudomonas savastanoi pv. glycinea. Bacterial blight is very common in soybean fields this year because of the frequent rainfall and high relative humidity. Leaf symptoms usually start in the upper, younger leaves because they are most susceptible. Small, irregular shaped reddish-brown lesions are surrounded by yellow haloes (Figure 6). Lesions may fall apart, giving leaves a tattered appearance. The bacteria survive in crop debris and seed. Disease is favored by rainstorms, high winds, and hail, as well as cooler temperatures.

Accurate diagnosis is critical for effective crop disease management. Symptoms of some of these and other diseases can appear very similar, but management strategies vary greatly.

Please submit a sample to the UNL Plant and Pest Diagnostic Clinic to identify a disease or other problem. (See information on submitting a sample and the submission form.) Consult the 2019 Guide for Weed, Disease, and Insect Management for further information. (See excerpt with soybean fungicide product efficacy and product information.)