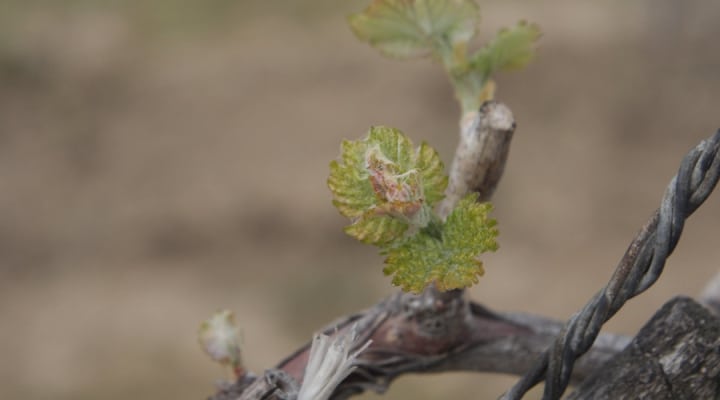 Fruit growers are worried that the frost will kill off large numbers of early buds, which appeared in March as temperatures rose above 20 C (68 F), and disrupt the whole growing season. (tribp, Flickr/Creative Commons)

CHABLIS, France (AP) — French vintners are lighting candles to thaw their grapevines to save them from a late frost following a winter warm spell, a temperature swing that is threatening fruit crops in multiple countries.

Ice-coated vines stretched across hillsides around Chablis as the Burgundy region woke Monday to temperatures of minus 5 C (23 F). Fruit growers are worried that the frost will kill off large numbers of early buds, which appeared in March as temperatures rose above 20 C (68 F), and disrupt the whole growing season.

The frost is particularly frustrating after a similar phenomenon hit French vineyards last year, leading to some 2 billion euros ($2.4 billion) in losses. Scientists later found that the damaging 2021 frost was made more likely by climate change.

Before dawn Monday, row upon row of candles flickered beneath the frosty vines in Chablis. As the sun rose, it illuminated the ice crystals gripping the vines.

Some vintners tried to warm the vines with electrical lines, or sprayed the buds with water to protect them from frost. The water creates a thin layer of ice that ensures the blossom’s temperature remains around freezing point but does not dip much lower.

Chablis vintner Daniel Defaix, whose vineyard has been producing wine for 400 years and lived through a multitude of climate disasters, calls what’s happening now “a very, very serious frost.”

He noted temperatures are dropping a few degrees lower than last year, down to minus 7 C in places, and have reached warmer hilltop plots as well as those in the cooler valleys.

He placed paraffin candles on the soil or set up special irrigation systems to protect about five hectares of his most valuable grand cru and premier cru grapes, but had to leave the remaining 25 hectares to face the forces of nature.

At a cost of 10 euros per candle — and 600 candles per hectare — it was too costly to invest in saving the rest of the grapes.

“After that, you have to cross your fingers and pray to God,” he told The Associated Press.

In neighboring Switzerland, fruit growers scrambled Sunday to protect their crops, rolling out heaters and pellet stoves at night and around dawn, or turning on overhead irrigation systems, said Beatrice Ruettimann, a spokeswoman for Swiss Fruit, a union of fruit producers. Some unfurled plastic sheeting to shield their trees.

Temperatures fell below freezing in most fruit-growing regions in Switzerland, she said. Northwestern Switzerland bore the brunt of the cold snap, which was most critical for stone fruit — like cherries, apricots and plums — because they’re in bloom and “therefore in a delicate stage,” she said. A few early varieties of apple including Gravensteiner and Williams were also affected.

In the Betuwe fruit-growing region of the Netherlands, farmers sprayed their trees with water Saturday night and into the early hours of Sunday morning to ensure a layer of ice protected fragile blossoms from the sub-zero temperatures.

Last year’s April frost led to what French government officials described as “probably the greatest agricultural catastrophe of the beginning of the 21st century.” The pattern was similar: an intense April 6-8 frost after a lengthy warm period in March.

Researchers with the group World Weather Attribution studied the effect of the 2021 frost on the vineyard-rich Champagne, Loire Valley and Burgundy regions of France, and found the March warmth made it particularly damaging.

The researchers concluded that the warming caused by man-made emissions had coaxed the plants into exposing their young leaves early, before a blast of Arctic cold reached Europe in April.

The cold weather was not bad news for all, however. In the central Dutch town of Winterswijk, skaters took to the ice Sunday at the local ice skating club. “This is unique: Skating on natural ice in April,” the club’s “ice master,” Hendrik ten Prooije, told local network Omroep Gelderland.

Jamey Keaten in Geneva and Mike Corder in The Hague, Netherlands contributed.