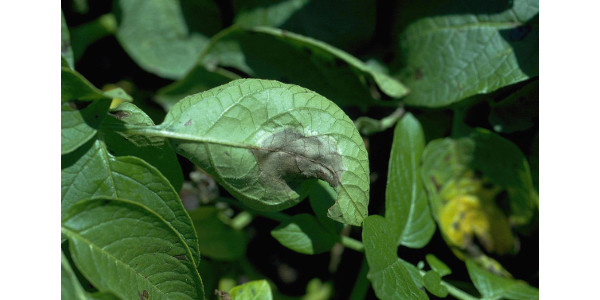 Late blight on a potato leaf. (Courtesy of University of Wisconsin-Extension)

Amanda Gevens: Yeah, so at this point in the season, we don’t actually have late blight in any production fields or in home gardens, which is great news. Our disease forecasting tools are telling us that we’ve had the right weather to favor late blight, if the pathogen is around. This tool lets us know when we’ve had the right temperature and humidity, which would favor the development of late blight in tomato and potato crops.

Lorre Kolb: So, what would it look like if someone suspects they have late blight?

Amanda Gevens: The typical symptoms of late blight are typically circular or irregularly shaped, round, water soaked looking lesions on the leaves. The lesions can appear on stems as well and that brown discoloration can often become covered in a white to gray fuzz.

Lorre Kolb: So, what should someone do if they suspect late blight in their garden?

Amanda Gevens: We are taking free late blight samples in at the Plant Disease Diagnostic Clinic, at 1630 Linden Drive, here on campus in Madison, and our diagnostician is more than happy to look at plants directly in the clinic or he will receive photos by email.

Lorre Kolb: And then what will people do if it is positively identified as late blight?

Amanda Gevens: It is a regulated disease. Because it can drastically impact the economics of our agricultural community, we have to report it. I will recommend that the grower destroy the plant if it’s a single plant. If it’s a group of plants in a large field, I will have them destroy just those plants affected plus some plants along the perimeter of that infected area, because often there are a greater number of plants infected, but they’re just not showing symptoms yet.

Lorre Kolb: So, if someone had late blight in their plants last year, should they be concerned about it this year?

Amanda Gevens: The late blight pathogen that we have here in the U.S. is not one that can be soil borne, but the late blight pathogen can stick around in potato tubers. That could be a source. If there were any tomato plant parts that were infected that you had composted from last year’s gardening efforts, that too can provide a reservoir for the pathogen. So, it really does require either a tomato or potato plant that in some way was kept alive over the winter months.

Lorre Kolb: So, are there some tomato varieties that are resistant to late blight?

Amanda Gevens: Yes, there are several tomato varieties that have very strong late blight resistance. We’ve been recommending them for several years now. One of them is known as Iron Lady. Additional varieties with late blight resistance include, Defiant, Mountain Magic, and Plum Regal. Seed is available through a number of commercial seed suppliers.

Lorre Kolb: We’ve been visiting with Amanda Gevens, Department of Plant Pathology, University of Wisconsin-Madison/Extension, in the College of Agricultural and Life Sciences, and I’m Lorre Kolb.