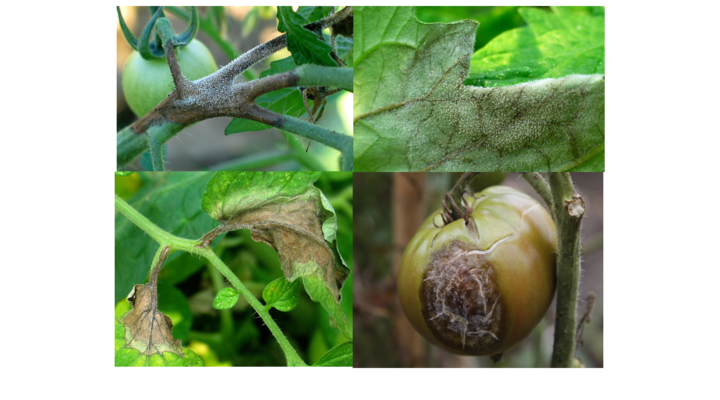 CHAUTAUQUA CO., N.Y. — Late blight was detected in Cattaraugus, Allegany and Genesee counties on August 16th. Late blight is a devastating, airborne disease of tomatoes and potatoes best known for causing the Irish Potato famine. Late blight is caused by a fungus-like organism that spreads dozens of miles on storm fronts.

Late blight can kill plants in just one week. Disease spots are often dark gray to brown in color and may or may not have a ring of pale green tissue around them. They are often irregular in shape and size, and often become as large as a quarter. Leaf spots will often have small fuzzy white spores on the underside of the leaf in wet and humid conditions. Late blight will put dark brown to black smears on plant stems, as if someone took a small, muddy paint brush to the plants. Tomato fruit may also develop large, greasy-looking, brown, gray, or black smears on the upper part of the fruit. Late blight does not resemble yellowing leaves with lots of small black specks that are worst at the bottom of the plant.

As this disease is aggressive and very damaging to area farmers, Cornell Cooperative Extension asks that anyone suspecting they have late blight please contact their local CCE office for assistance. In Chautauqua County, the office can be reached at 716-664-9502. Commercial vegetable farmers may contact the Cornell Vegetable Program at 585-406-3419.

Support to gardeners is one of many programs offered by Cornell Cooperative Extension of Chautauqua County (CCE-Chautauqua) in line with the County’s 20/20 Comprehensive Plan. CCE-Chautauqua is a community based educational organization, affiliated with Cornell University, Chautauqua County Government, the NYS SUNY system, and the federal government through the United States Department of Agriculture’s National Institute of Food and Agriculture. For more information, call 716-664-9502 or visit our website at www.cce.cornell.edu/chautauqua. Cornell University Cooperative Extension provides equal program and employment opportunities.

Taste NY is back at the Great New York State Fair