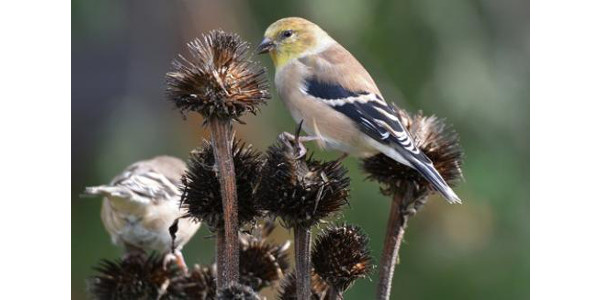 Horticulture specialists with Iowa State University share information about when to delay cutting back perennials and which perennials need mulch protection from extreme winter temperature fluctuations that cause heaving. (Photo credit: Gold Finch on Echinecea by C. Hamilton/stock.adobe.com)

AMES, Iowa — Horticulture specialists with Iowa State University share information about when to delay cutting back perennials and which perennials need mulch protection from extreme winter temperature fluctuations that cause heaving. To have additional questions answered contact Hortline at hortline@iastate.edu or 515-294-3108.

When should I cut back perennials?

Most perennials, such as peonies, garden phlox, bee balm, daylilies and hostas, can be cut back in November after a hard freeze has destroyed the above ground growth. Remove the dead debris in early spring if fall cleanup isn’t possible or you prefer a more natural look in winter.

Do not cut back semi-evergreen or evergreen perennials, such as coral bells, hellebores, pigsqueak, evergreen candytuft, European wild ginger, woodland phlox and moss phlox, in fall. Clean up these perennials as needed in spring.

You may also wish to delay cutting back purple coneflower, black-eyed Susan, and sunflower heliopsis until spring, as their seedheads provide food for goldfinches, chickadees and other birds in winter.

Which perennials are most likely to be heaved up out of the ground in winter?

Repeated freezing and thawing of the soil during the winter months can lift up or heave some perennials out of the soil. Heaving exposes the plant’s crown and roots to cold, dry air. Perennials that are heaved out of the ground may be seriously damaged or destroyed.

Perennials most susceptible to heaving are shallow-rooted plants and those planted in late summer or early fall. Perennials prone to heaving include garden mum (Chrysanthemum spp.), Shasta daisy (Leucanthemum spp.), painted daisy (Tanacetum spp.) and coral bells (Heuchera spp.). Perennials planted in late summer/early fall are susceptible to heaving because they don’t possess extensive root systems and are more easily pushed up out of the soil. Generally, most well established perennials (those in the ground for one or more years) are not prone to heaving.

Heaving of perennials can usually be avoided by planting in spring and mulching in fall. Spring planting is especially important for garden mums, Shasta daisies and other perennials prone to heaving. Perennials planted in late summer/early fall should be mulched with several inches of straw or pine needles in late fall. A mulch helps keep the soil uniformly cold after it has frozen, thus eliminating the freeze-thaw cycles and the resulting soil heaving.

Should I cut back my mums in fall?

Garden mums have shallow, fibrous roots. Repeated freezing and thawing of the soil during the winter months can heave plants out of the ground and cause severe damage or even death. Garden mums are more likely to survive the winter when plants are left standing over winter. For additional winter protection, cover garden mums with several inches of straw or pine needles in late November or early December. Remove the mulch in early to mid-April. Also, remove the dead mum debris at this time.