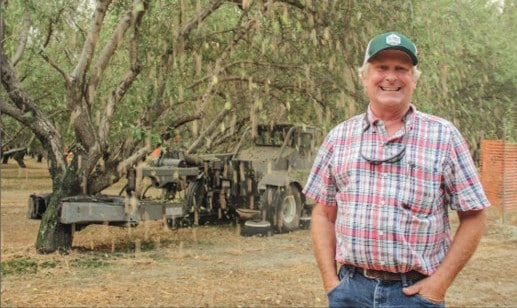 California almond growers including Walt Stile, shown here, are havesting what is expected to be a 3 billion-pound almond crop. Stile stands in a Glenn County orchard while employee Jose Via runs the harvester. (Christine Souza, California Farm Bureau)

SACRAMENTO, Calif. — With the 2020 almond harvest underway, soon to be followed by harvests of pistachios and, next month, walnuts, California farmers and marketers say they expect larger or record crops—which could prove challenging due to the pandemic’s impact on world markets, including stalled shipments and pricing.

As he harvested nonpareil almonds in Glenn County last week, farmer Walt Stile said, “We expect a record crop, close to 3 billion pounds,” citing an estimate published last month by the U.S. Department of Agriculture. The 3 billion-pound crop would represent an 18% increase from the 2019 harvest.

Stile, who grows almonds and walnuts in Butte and Glenn counties, said he got a late start with almond harvest due to pest management applications for navel orangeworm.

He said the fires burning statewide had affected conditions in the orchard (See story).

“Fires have caused hazy conditions and added moisture, which is not good drying weather for the almonds,” Stile said. “We like to leave them drying on the ground no longer than five to seven days. Because of haze and high humidity, these nuts are going to have to stay on the ground a lot longer than I would like.”

“The wildfires in California are causing smoke drift to linger in our valley,” Roush said. “The smoke usually does not affect the crop, but makes for a difficult harvest on crews; they are not only dealing with heat, but bad air quality.”

Roush and Stile said they train employees about safety requirements and about measures in place to prevent the spread of COVID-19. Roush said she encourages employees to maintain proper social distancing and wear personal protective equipment, and to take precautions to protect from heat and bad air quality.

“Employee education is critical to make sure all of the men and women involved stay healthy,” she said. “We all are educated on how to conduct ourselves; the health of everyone on our team is essential for success.”

Almond sector leaders report disruptions in global markets due to COVID-19 and ongoing trade disputes have caused some short-term challenges, including a downward pricing trend.

Craig Bilsborough, a nut buyer for Farmers International Inc. in Chico, said, “Just because you sell the nut doesn’t mean you’re going to get paid. We’ve had a lot of problems with that in the last year or so.”

When mandatory port shutdowns did not allow buyers to pick up their inventories and the nuts “got stacked up at various ports around the world,” they did not want to pay the original contracted price when they finally did pick them up, Bilsborough added.

Roush said she expects markets for nut crops to continue to fluctuate, adding, “With the global pandemic, situations are very volatile and can be changed in an instant.”

Despite the challenges, almond leaders reported worldwide almond consumption rose almost 5% and that early commitments for the 2020 crop stand at 696 million pounds.

Almond Board of California President and CEO Richard Waycott said the increase in worldwide consumption was accomplished “despite the COVID-19 pandemic and foreign tariff headwinds that have presented challenges for both the industry and global customers alike.”

Regarding the pistachio outlook, American Pistachio Growers President Richard Matoian said farmers are starting harvest of early varieties, noting that the crop looks “clean”; however, size and quality will not be known until later in the season.

“The pistachio crop should surpass the 1 billion-pound mark, but we had some issues early in the year such as a lack of chill and erratic weather during bloom, which is going to show itself in our final production numbers,” Matoian said. “The estimate could be closer to 900 million pounds to a billion pounds.”

Nut marketers say domestic consumption is holding up, and Matoian said that has been the case with pistachios.

“Our domestic market is doing pretty well,” he said, noting that about 28% of domestic sales is pistachio kernels. “Restaurants and their use of pistachios has gone down, but that’s been counterbalanced by people being home and snacking more at home.”

The pistachio business, however, is seeing an impact on the export market, and Matoian added Chinese tariffs remain a concern.

“Literally in every (export) market, we are down compared with past years, so it has definitely had an effect, whether it’s COVID-related issues or consumers not eating the same way that they used to,” he said.

In walnut orchards, harvest is not expected to begin until next month. California Walnut Commission CEO Michelle McNeil Connelly said the walnut crop estimate is due to be released Friday.

“From what we’re hearing, the nut sets look heavy and some of the varietals that were down last year have rebounded, so we anticipate that it’s likely to be a heavy bearing year,” Connelly said.

As seen with other nut crops, she said, walnut consumption is up domestically, with positive growth and walnuts selling well at the retail level.

“Because of COVID, people are wanting to make healthier choices, and walnuts are a perfect fit,” Connelly said. “With respect to the domestic market, if you look at our domestic business, 60% of that is retail and the remaining 40% is divided up among food manufacturing and food service.”

Almonds, pistachios and walnuts are all among the specialty crops eligible for pandemic relief through the USDA Coronavirus Food Assistance Program. Applications remain open through Sept. 11. More information on the program can be found at www.farmers.gov/cfap.