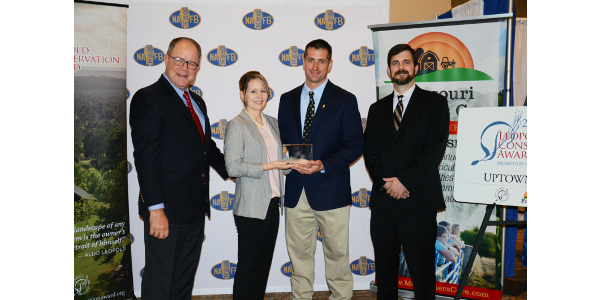 “It’s a sincere honor to receive the first Missouri Leopold Conservation Award,” said Matt Lambert. “The program is important for Missouri agriculture. We have abundant natural resources in this state, and we must take care of them. Missouri farmers play a key role in conserving our land and water, but there is always room for improvement. This award will hopefully encourage others to continue to look for ways to do more.”

Uptown Farms consists of row crop and hay production, as well as a herd of Red Angus cattle and small flock of Hampshire and Dorper sheep. The Lamberts operate a no-till farm, and utilize cover crops to help avoid soil erosion and run-off.

The 2017 Leopold Conservation Award was announced at the National Association of Farm Broadcasters in Kansas City Nov. 8, 2017 and will be officially presented Jan. 6, 2018 at the 50th Missouri Cattle Industry Convention and Tradeshow in Columbia. The Lamberts receive $10,000 and a crystal award depicting Aldo Leopold.

Putting a face on government

Join us for a Growing Organic Expertise Workshop
August 3, 2022