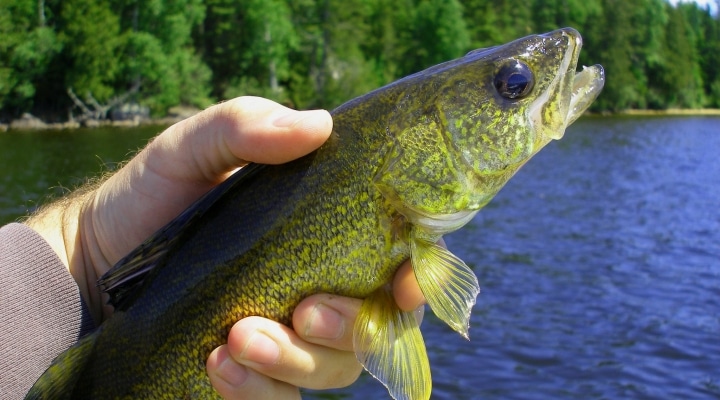 Because walleyes are a cool-water fish species with a limited temperature tolerance, biologists expected them to act like the proverbial “canary in a coal mine” that would begin to suffer and signal when lakes influenced by climate change start to warm. But in a new study, a team of researchers discovered that it is not that simple.(photo by Joe Ferguson, Creative Commons/flickr.com)

UNIVERSITY PARK, Pa. — Because walleyes are a cool-water fish species with a limited temperature tolerance, biologists expected them to act like the proverbial “canary in a coal mine” that would begin to suffer and signal when lakes influenced by climate change start to warm. But in a new study, a team of researchers discovered that it is not that simple.

“After analyzing walleye early-life growth rates in many lakes in the upper Midwest over the last three decades, we determined that water clarity affects how growth rates of walleyes change as lakes start to warm,” said Tyler Wagner, Penn State adjunct professor of fisheries ecology. “In some lakes, warming actually led to increased walleye growth rates, in others there essentially was no change, and in others, growth rates declined. The different responses of growth rates to increasing water temperatures across lakes appear to be influenced by water turbidity.”

The research is significant, Wagner explained, because walleye fisheries in the upper Midwest are important not just ecologically, but also from an economic and cultural perspective. Because walleye fishing is a valued social activity in Minnesota and Wisconsin and hundreds of thousands of walleye fingerlings are stocked there to bolster wild populations, the region is the ideal place to study the effect of warming conditions on the fish.

According to the U.S. Environmental Protection Agency, the Midwest has gotten warmer, with average annual temperatures increasing over the last several decades. Between 1900 and 2010, the average air temperature increased by more than 1.5 degrees Fahrenheit in the region.

Using data provided by the Minnesota and Wisconsin departments of Natural Resources, researchers quantified annual walleye early-life growth rates from 1983 to 2015 in 61 lakes in the upper Midwest. Then they estimated the relationship between early-life growth rates and water growing degree days — an indicator of the temperature the fish are exposed to — over those 32 years. Importantly, they also examined how water turbidity influenced growth rates across the 61 lakes, correlated to an increased number of growing degree days.

Their findings, published Feb. 23 in the Canadian Journal of Fisheries and Aquatic Sciences, showed that, on average, early-life growth rates increased with increasing growing degree days in turbid lakes, remained more or less unchanged in moderately clear lakes, and decreased in very clear lakes. This suggests that a “one-size-fits-all” approach to managing walleye populations across a broad landscape may not be effective, according to Wagner.

“Rather, lake-specific characteristics likely will be important in determining how walleye populations respond to climate change,” he said.

The analysis also indicated that walleye growth rates varied among lakes of different sizes, explained lead researcher Danielle Massie, who graduated from Penn State in 2020 with a master’s degree in wildlife and fisheries science.

“Walleye early-life growth rates, on average, were significantly greater in larger lakes,” she said. “Our results provide insights into the conservation of cool-water species in a changing environment and identify lake characteristics in which walleye growth may be at least somewhat resilient to climate change.”

The results of the research were surprising, Wagner conceded, because researchers expected to see walleye growth rates in most lakes decrease with more growing degree days — since walleyes prefer cool water. But that did not happen in most of the lakes they studied.

“It sounds counterintuitive at first, but if we think about fish growth, we can think about it as a performance curve, where growth increases with increasing temperature to a certain point,” he said. “But as the lake warms past that optimum temperature, the curve descends, and we’ll see declining growth as the temperature increases beyond that point.”

Slightly higher water temperatures in some upper Midwest lakes have resulted in increased growth rates for walleyes, but if water temperatures continue to rise, influenced by a warming climate, walleye populations in the region will suffer, predicted Wagner, assistant leader of Penn State’s Pennsylvania Cooperative Fish and Wildlife Research Unit, housed in the College of Agricultural Sciences.

“We’re going to reach a water temperature tipping point where growth will decline, and then we’ll see deleterious effects,” he said.  “This is why understanding what factors, such as turbidity and lake size, influence how fish populations respond to warming is critical for informing management and conservation efforts.”