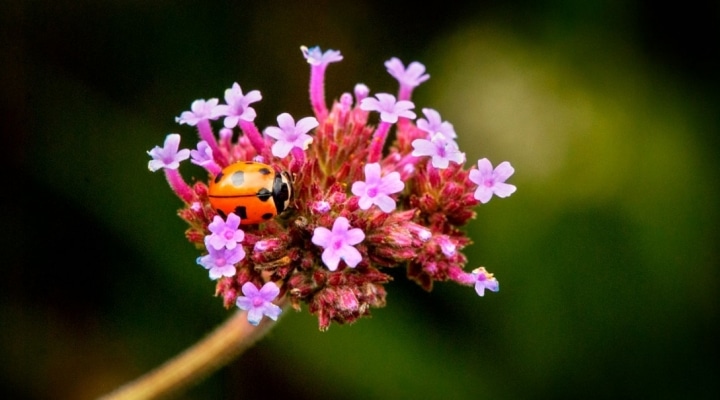 ITHACA, N.Y. — Most predators obtain a balanced diet from their prey, but Cornell researchers recently discovered that in the case of aphid-eating ladybugs, the rule doesn’t apply.

That’s because a diet consisting solely of aphids lacks an essential nutrient –sterols, like cholesterol – which all male animals need to make sperm, hormones, and to maintain cell health.

As a result, farm-friendly aphid-eating ladybugs supplement their diets with sterol-rich leafy greens.

“We showed that a large group of predacious lady beetles eat leaves to obtain sterols,” said Todd Ugine, a research associate in the lab of John Losey, professor of entomology. Ugine is the first author and Losey is a co-author of the paper, “Herbivory Improves the Fitness of Predatory Beetles,” published Sept. 10 in the Journal of Animal Ecology.

The study is important because farmers often rely on wild ladybugs to control aphids on their crops, so knowing which plants ladybugs will and won’t eat provides insights into how the beetles function in the field. The results also may help with conservation efforts as many native ladybug species have experienced precipitous declines across North America.

In addition, animals are known to have appetites for five major nutrients – carbohydrate, fat, protein, sodium and calcium – but this research revealed that aphid-eating ladybugs have a sixth appetite – for sterols.

“There are only a few known appetites in the world and they’re very specific to essential nutrients, but here we have uncovered a new appetite in the animal kingdom,” Ugine said.

In the study, Ugine collected seven different ladybug species. In the lab, he reared pea aphids on fava bean plants, yielding aphids with very low sterol levels. Ugine then set up four treatments for each of the seven species: males reared solely on the pea aphids; males reared on pea aphids and sterol-rich leaves; and females reared in both treatments.

“Generally, all of the beetles survived very well,” Ugine said, “but when we looked at the total number of eggs laid and the percentage of eggs and females that were viable, that’s when we saw a huge effect.”

A 2019 paper by the same team first identified sterol deficiency and an appetite for sterols in one ladybug species. Tests confirmed that the lady beetles sought out, identified and ate sterols when deficient.

Future work will focus on uncovering sterol taste receptors and whether other insects that specialize on aphids, such as the larvae of lacewings and hoverflies, lack sterols and also crave them.

The study was funded by the National Science Foundation and the United States Department of Agriculture.