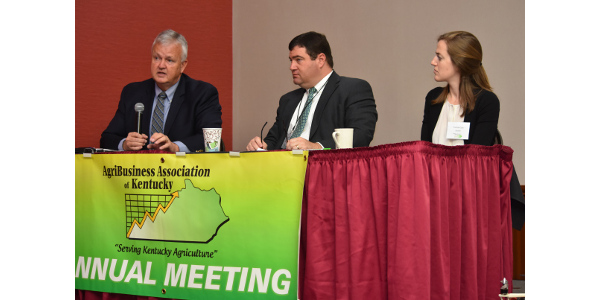 FRANKFORT, Ky. — (A version of this article first appeared in The Farmer’s Pride, November 16 issue)

The U.S. Department of Agriculture (USDA) explained in a news release accompanying the Lacefield announcement that State Directors help implement policies in planning, organizing, and administering FSA programs in their respective states. They are also responsible for running the day-to-day activities of the state FSA office. Secretary Perdue also announced directors for 15 other states.

“These state directors will help ensure that USDA is offering the best customer service to our farmers, ranchers, foresters, and agricultural producers across the country,” Secretary Perdue said in making the announcement. “FSA plays a critical role in helping the people of agriculture, and are able to connect with people in their home states.  They are the initial points of contact for millions of our USDA customers.  Our goal is to help rural America prosper, and these state leaders will be of great assistance in that task.”

Lacefield suggested that, at this point, he should probably be identified as an “informed voter” rather than a public official.

“I’m four days on the job,” he observed “so, we’re not going to have a whole lot of update coming from the FSA, my bold vision or agenda.”

Lacefield did have some observations on trade, interest rates, and the Farm Bill, areas he has been familiar with in his previous positions. He most recently served as the Market President of FNB Bank and currently sits on the board of the Kentucky Corn Growers, Kentucky FFA Foundation, and the Kentucky Ag Leadership Program.

Lacefield referenced a trip he made with one of the previous day’s Summit speakers, ag economist Dr. Will Snell from the University of Kentucky as one of the factors that focused him on international trade. “I spent two weeks in New Zealand with Dr. Snell, and that whole country is dependent on trade,” he said. “The ag economy is such a big part of their economy, that it’s all about trade.” He noted one of the principal topics of interest for the farmers there is the international exchange rate and how their dollar is standing up against other currencies.

Many of the Summit speakers were predicting an increase in interest rates when the Federal Reserve Board meets in December. “Right now, we’ve got about a 75 percent chance of a rate hike coming in the December meetings,” Lacefield concurred. He feels the potential for the increase is tied to the outcome of current federal tax discussions.

On the Farm Bill, Lacefield and Cain agree that there’s little chance of the new legislation taking shape before the current one expires. Lacefield encouraged the audience to take part in upcoming listening sessions to be held by Kentucky Farm Bureau later this month.