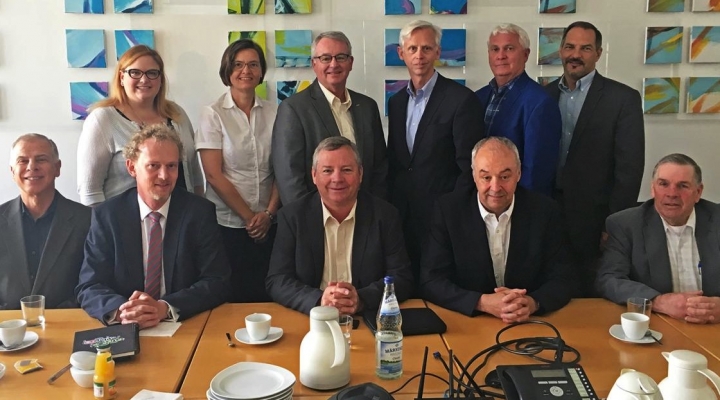 NMPF’s officers met this week with their European counterparts in Denmark, Germany (above) and France to discuss mutual issues of interest, including the concern that imitation dairy foods are falsely marketing themselves as containing the same nutrition as real milk, cheese and yogurt. (Courtesy Photo)

During a visit Friday with French dairy cooperative Sodiaal and the French Dairy Interbranch Organization (CNIEL), NMPF’s board officers applauded the European high court’s ruling that upholds the standards of identity and labeling for milk products, and emphasized that NMPF will continue to fight for the enforcement of existing U.S. dairy food regulations.

“The European Court of Justice did just what we’re asking the U.S. Food and Drug Administration (FDA) to do: Uphold and enforce current standards of labeling for milk and milk products,” said Jim Mulhern, NMPF president and CEO. NMPF is leading efforts on Capitol Hill to pass the DAIRY PRIDE Act, legislation that would require FDA to develop a timetable for enforcing standards of identity for dairy foods.

“It’s encouraging and appropriate that the court soundly rejected the argument that consumers understand the inherent composition and nutritional differences between real dairy products and plant-based imitators,” Mulhern said. “None of the fake milk products provides the same high-quality nutrition package as real milk. It is past time that manufacturers of these products, which are concoctions of powdered plant ingredients and water, abide by existing standards, whether in Europe or the United States.”

Last week, the European court’s decision prohibited TofuTown, a German plant-based foods company, from using dairy-specific terms in its labeling or advertising, noting that current European regulations expressly reserve the term “milk” for products derived from animals. The court further clarified that such regulations “reserve designations like ‘cream’, ‘chantilly,’ ‘butter,’ ‘cheese,’ and ‘yoghurt’ solely for milk products, that is, products derived from milk.”

NMPF’s officers met this week with their European counterparts in Denmark, Germany (left photo) and France to discuss mutual issues of interest, including the concern that imitation dairy foods are falsely marketing themselves as containing the same nutrition as real milk, cheese and yogurt. The groups also discussed the damage caused by the emerging use of anti-science-based fear tactics to market dairy products, such as the “non-GMO” movement.

“There’s no doubt that our colleagues here in Europe are facing similar challenges regarding consumer confusion around a variety of issues,” said Randy Mooney, chairman of NMPF. “It’s been beneficial to share learnings on such challenges and try to find solutions. On the matter of milk standards of identity, we’re hopeful this recent EU ruling will inspire our own FDA to begin enforcing its regulations.”

Plan seeks to grow Indiana ag over next decade