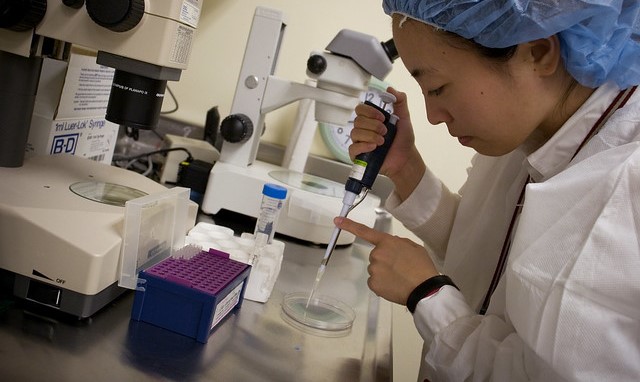 Entrepreneurs see an opportunity where there's been a dearth of lab-grown meat startups that proliferated in the U.S. (Stock image via National Center for Advancing Translational Sciences, Flickr/Creative Commons)

VANCOUVER — Canadian companies plan to serve up chicken, beef burgers and mouse-meat cat treats in the coming years, all without the need to slaughter a single animal.

Entrepreneurs see an opportunity where there’s been a dearth of lab-grown meat startups that proliferated in the U.S.

Cellular agriculture takes cells from animals and grows them to create milk, eggs, meat or other products. Proponents argue the method is kinder to animals and the environment.

“There was an opportunity here in Canada, just because the field is still so undefined, to really create a presence here and to try to drive it forward,” said Lejjy Gafour, co-founder of Edmonton-based Future Fields.

Gafour started the company in 2017 with his friend of more than a dozen years, Matt Anderson-Baron, who holds a PhD in cell biology.

They’re working on creating two products: a serum that feeds the cells to help them grow, and chicken meat.

Gafour estimates — conservatively — that the chicken is five to seven years away from being ready for public consumption, while the serum will be finished sooner.

Future Fields wants to stock Canadian grocery shelves first, unlike many companies that eye the U.S. market for their debut. Gafour adds the caveat that the plan depends on how regulations unfold in both countries, as well as the company’s relationships with American partners and other companies.

Appleton Meats in Vancouver wants to create a beef burger without cows.

Sid Deen started the company at the end of 2017 and it’s conducting a lot of primary research that will lead to product development.

“We are looking at the cell types, the ability to grow them, to expand them and to get viable meat out of it,” said Deen, who serves as CEO.

Appleton is testing different prototypes and anticipates its product will be selling within three to five years — though, depending on how the research pans out, it could be something other than a burger.

He would like to see the product sold domestically, but isn’t opposed to stocking U.S. stores.

“I think it would be nice to have a Canadian company do this in Canada and provide it to a domestic market,” he said.

Two Torontonians started Because Animals, which is working to develop pet food using cellular agriculture, in 2016. Though it’s based in Delaware, the company conducts a lot of its research in Canada, CEO Shannon Falconer said.

Because Animals recently announced its first prototype for a cat treat made of field mouse meat produced using cellular agriculture.

“Now we have to work on scale,” said Falconer, as well as going through regulatory challenges in order to start selling the product, which makes it difficult to predict when it will appear on store shelves.

Those products will likely launch in the U.S. first, Falconer said. That and the company’s decision to headquarter in the U.S. is partly due to the country being the largest pet food market, she said, though the company is working toward selling its pet food in Canada too.

It can be more difficult to find investors as a Canadian company, said Gafour, as venture capitalist money tends to be concentrated in America. There also seem to be more investors with a lot of experience in the bio-technology industry in the U.S., he said.

Deen thinks people tend to underestimate the value of Canadian entrepreneurship and many companies turn to the U.S. because they believe there’s more infrastructure there.

While Canada may not be as flashy as its southern neighbour, said Deen, the country does provide a lot of support.

And, at least for Gafour, the lack of population density and other companies doing similar work in the country isn’t necessarily a bad thing.

“Absence of things is both an opportunity and a risk,” he said, adding it may be easier to acclimatize a smaller population to the notion of eating lab-grown meat.

“We definitely have the talent here to be able to create an industry such as this and to also own it.”