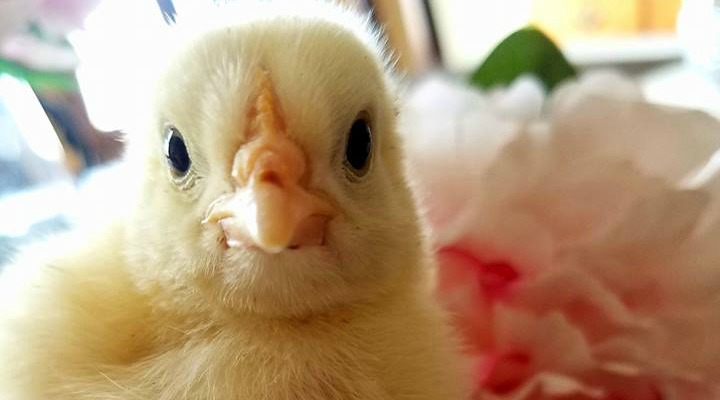 Rosaleen, a baby chick raised by Michelle Feaganes of La Salle, Mich., was crowned Purina's Strongest Chick in America. Along with Rosaleen's title, Michelle wins a year's supply of Purina® chicken feed for her backyard flock.

SHOREVIEW, Minn. — A backyard chicken in La Salle, Mich. recently claimed the title of Purina’s Strongest Chick in America. Michelle Feaganes entered her baby chick in the contest and competed against more than 1,100 entries to earn this honor. As the grand prize winner, Michelle receives a year’s supply of Purina® chicken feed for her backyard flock.

Michelle submitted her photo of Rosaleen, one of her new baby chicks, as part of the contest hosted by Purina Animal Nutrition on the Purina Poultry Facebook page. “Meet Rosaleen! We are starting her and her sisters off strong and healthy with Purina,” Michelle said with her submitted photo.

More than 120,000 Facebook fans across the country had the chance to vote in the 3-week contest, with the top three entries each week moving onto the finale round. Michelle claimed the title after competing in the grand finale against eight other finalists on April 23.

The nine other finalists were:

After finding out that Rosaleen won the nationwide contest, Michelle’s community celebrated together. “I’m so excited,” she said. “I work at an elementary school and they announced it over the PA!”

This is the second consecutive win for a Michigan bird in a Purina Poultry contest. Last fall, Mindie Dittemore of Bellevue, Mich. won the title of Miss Flock-Tober® 2017 with her Rouen duck named Baby Girl.

Purina’s Strongest Chick in America contest celebrates Purina’s #ChickStrong starter-grower feeds and is part of Purina’s annual celebration of baby chicks each spring. Backyard chickens are becoming more popular each year as a family pet with benefits. Both urban and rural families start raising flocks in the spring, so they can collect farm fresh eggs when the hens turn 18 weeks old in the fall. This year’s celebration centers around local poultry raising workshops called Purina® Flock Talk events.

As the name implies, these local celebrations have backyard flock conversations for everyone. Families considering chickens can learn how-to tips and pick up chicks right in the store. Experienced flock raisers can take part in advanced tracks and information deep dives.

“Anyone who loves animals is invited to attend their local Purina® Flock Talk event,” says Katie Signorelli, backyard flock marketing manager with Purina Animal Nutrition. “Our spring chick events have created excitement for years. This year, we renamed our celebration, and added activities for both beginner and experienced flock raisers. We can’t wait for this poultry party, because who doesn’t love talking chickens?”

To learn tips for starting a backyard flock and to find a local Purina® Flock Talk event near you, visit www.purinamills.com/chick-strong or connect with other flock raisers on Facebook or Pinterest.