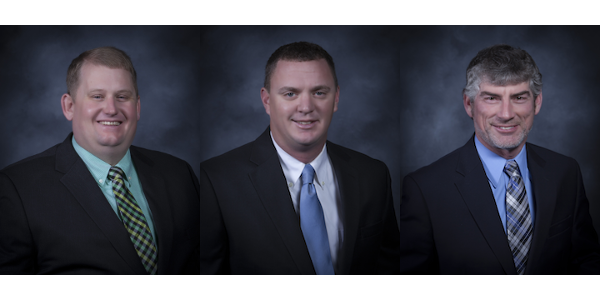 PRINCETON, Ky. — The farmer-leaders of the Kentucky Soybean Promotion Board (KSPB) held their summer meeting last week, and while the agenda was packed, one of the most pressing orders of business was the election of a new executive committee. KSPB is the entity charged with investing Kentucky’s soybean checkoff dollars to increase opportunities for profit, so the leadership of this board is an important responsibility.

Ryan Bivens of Fresh Start Farms in Hodgenville was chosen as chairman. Bivens began his leadership in the Kentucky Soybean Association (KSA), where he was elected to represent his area by his fellow farmers, in January 2007. He served the maximum term there of three, three-year terms. He was appointed to the Promotion Board by then-Commissioner of Agriculture James Comer as the Department of Agriculture representative in 2013, and was then reappointed by current Commissioner Ryan Quarles.

Jed Clark of Mayfield was chosen as vice chairman. He has served on the KSA board since January 2011. Larry Thomas of Elizabethtown was chosen as secretary/treasurer. Like most, Thomas came up through the ranks of KSA, and he is currently serving there as President.