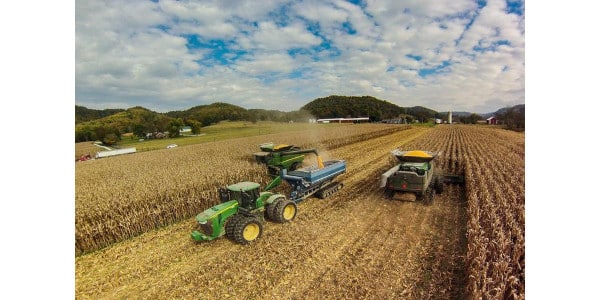 Based on September 1 conditions, Kentucky corn production is expected to be down 28 percent from last year, and soybeans 2 percent lower. (Matt Barton, UK agricultural communications)

LOUISVILLE, Ky. — The U.S. Department of Agriculture’s National Agricultural Statistics Service (NASS) released its crop production report Sept. 12 from the September Agricultural Yield Survey conducted at the beginning of the month. Based on September 1 conditions, the report showed corn production is expected to be down 28 percent from last year, and soybeans 2 percent lower.

“The high temperatures and drought in June and July took a toll on crops, corn more than soybeans”, said David Knopf, director of the NASS Eastern Mountain Regional Office in Kentucky. “It will be the smallest corn crop since 2012, which is due to a combination of fewer acres along with a lower yield. Forecast soybean yield is down from last year, but is expected to be above the five-year average.”

Soybean production for Kentucky is forecast at 101 million bushels, down 2% from 2021. Yield was estimated at 52.0 bushels per acre, down 2.0 from last month and down 4.0 bushels from a year ago. Acreage for harvest as beans was estimated at 1.94 million acres, up 100,000 acres from the previous year. U.S. soybean production is forecast at 4.38 billion bushels, down 3% from the August forecast but down 1% from last year. Based on September 1 conditions, yields are expected to average 50.5 bushels per acre, down 1.4 bushels from last month but down 0.9 bushels from last year. Area for harvest is forecast at 86.6 million acres, down 1% from the August forecast but up slightly from 2021.